A.E.W.O.M. [le strabisme du dragon] is conceived as a complex visual “diagram” consisting of a tight network of correspondences selected from different disciplines: art history, theoretical physics, theology and martial arts converge into a single emerging and organic space transforming the ancient christian site of the Museum, into a cross-disciplinary laboratory.

More specifically, the project visualizes the area of intersection between a mythological figure symbolizing the union of elements, The Dragon, and the Aleph Experiment of the CERN directed by the Italian researcher Roberto Tenchini, interviewed by the artist in the occasion of the show. The title of the project is an acronym inspired by this reference, literally “Aleph Experiment WithOut Mass”. 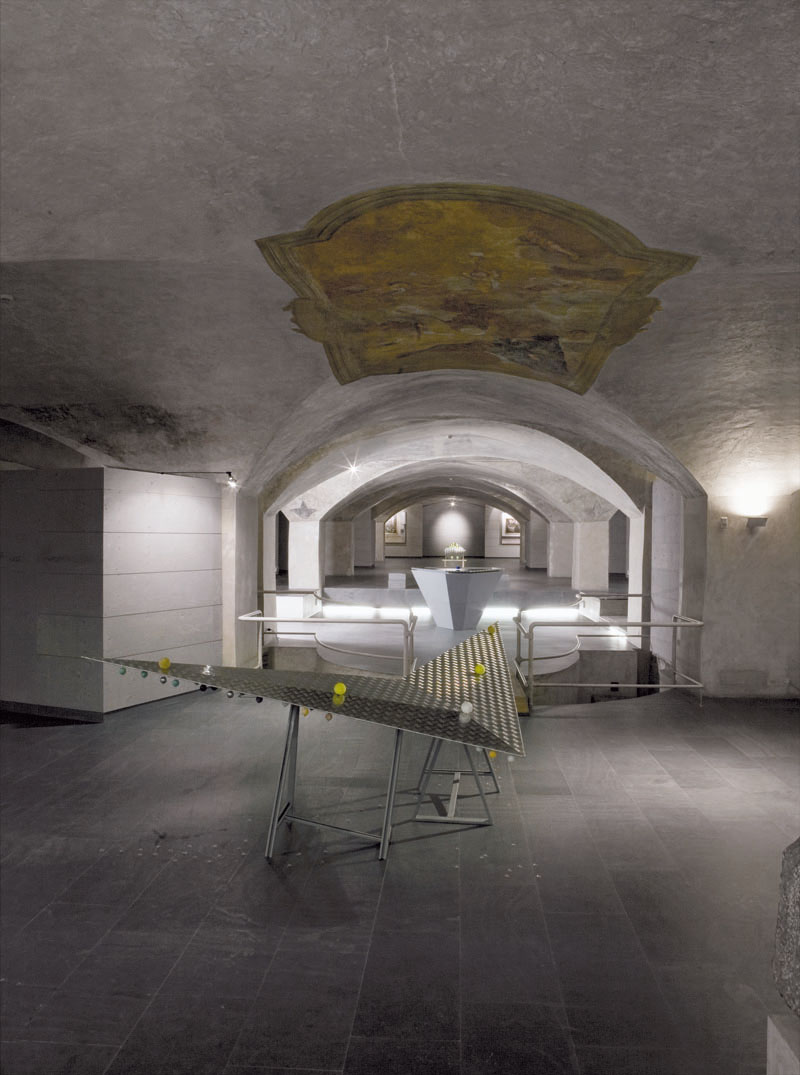 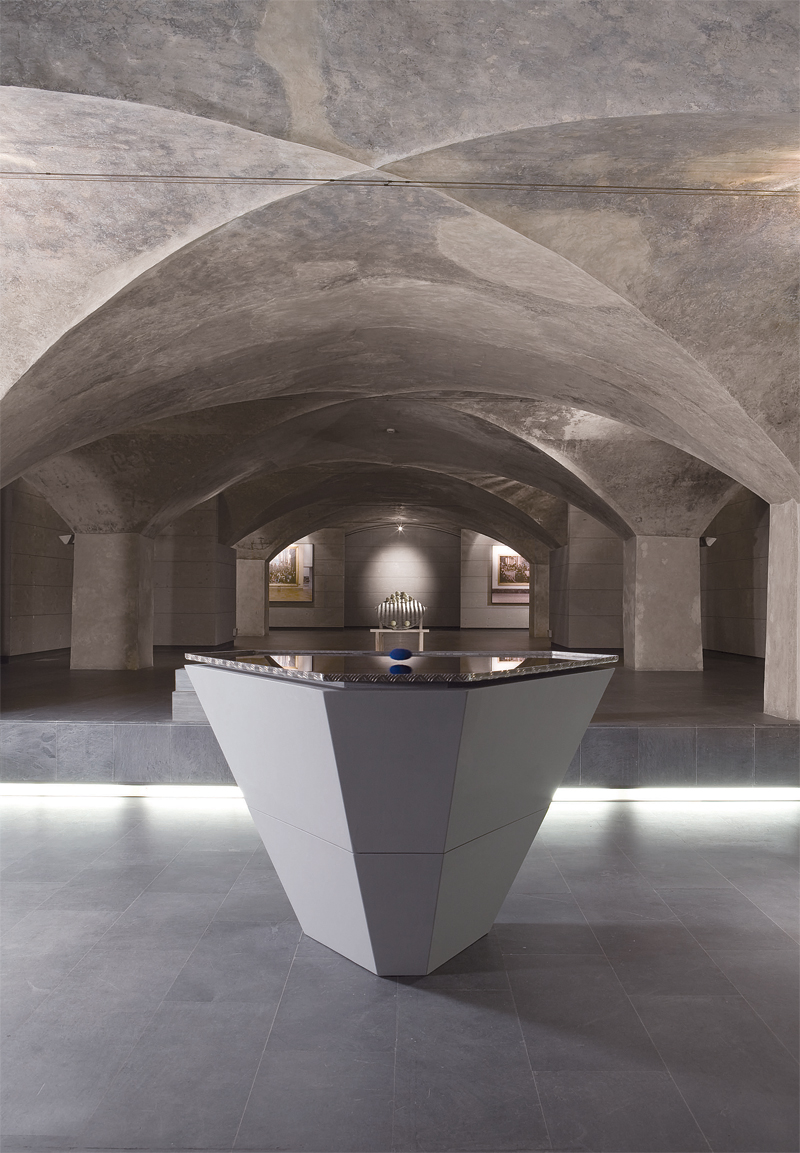 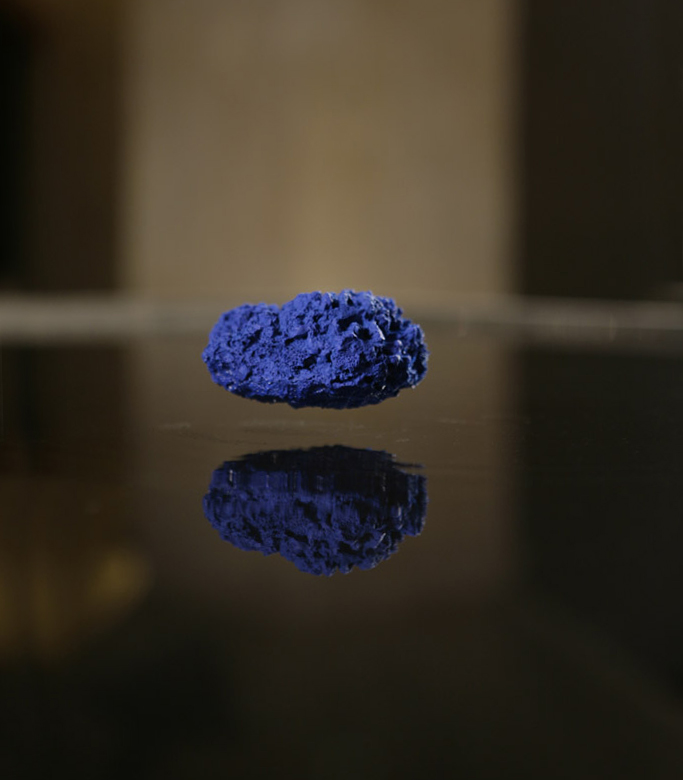 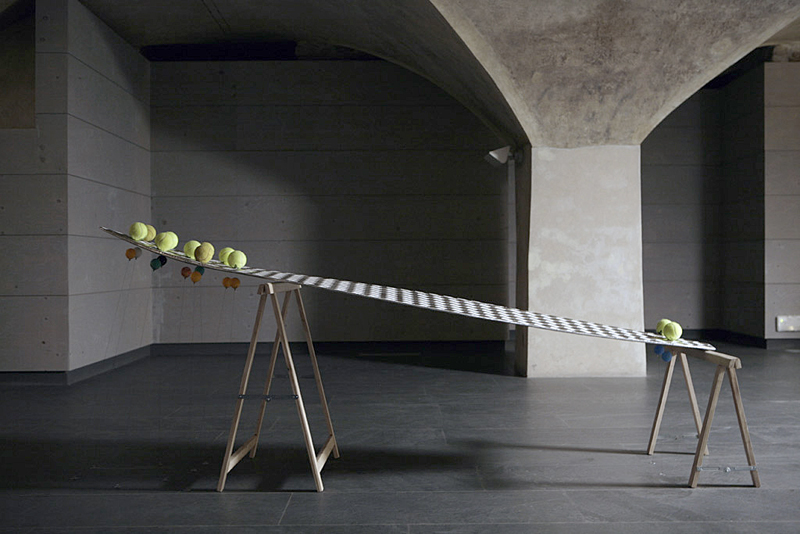 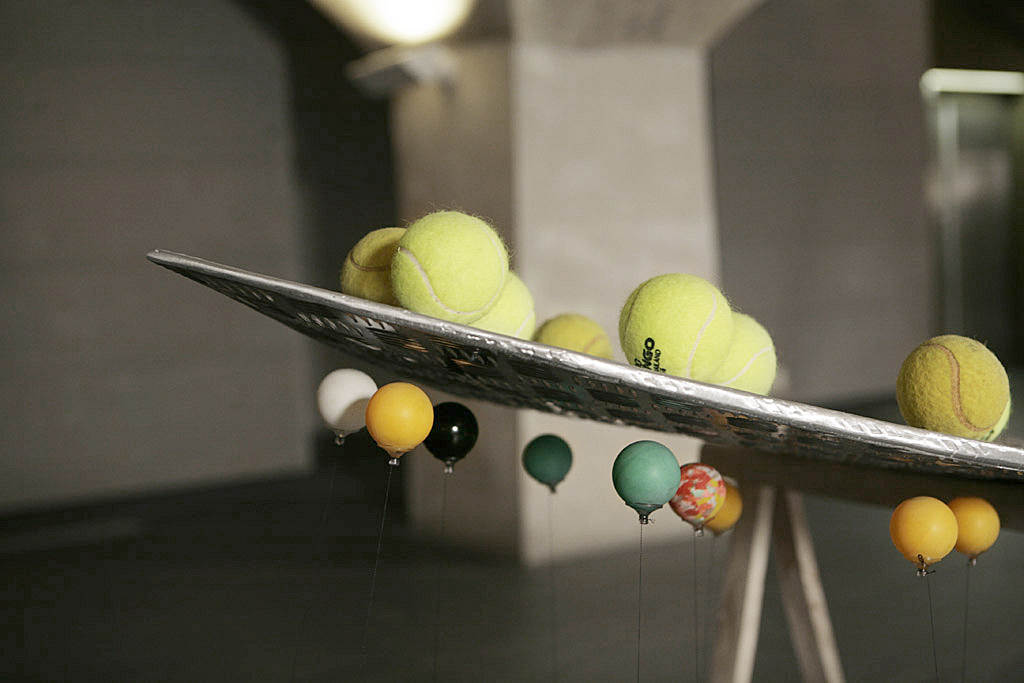 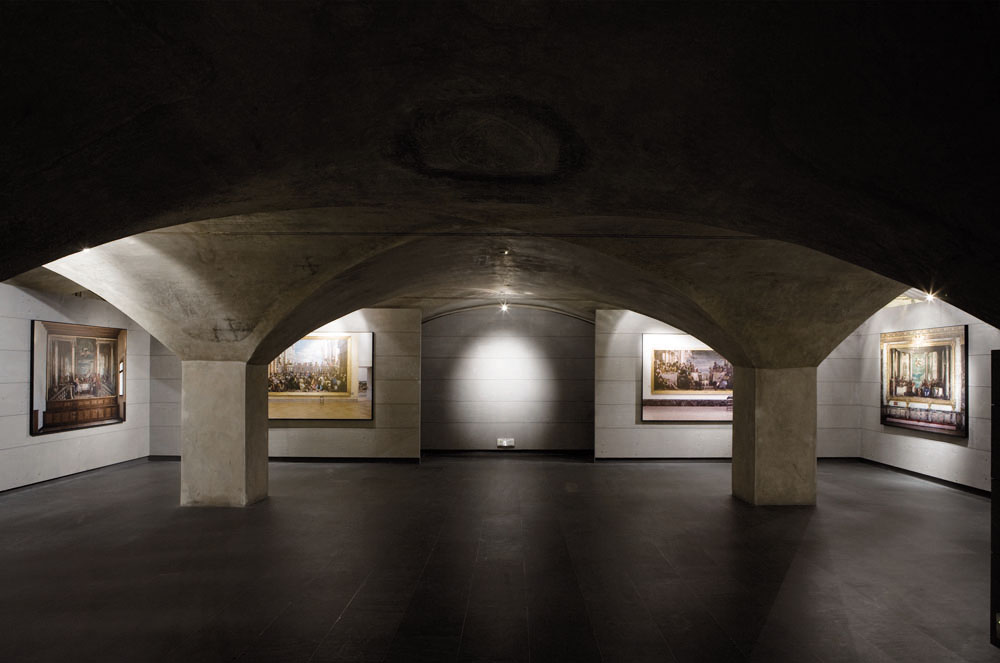 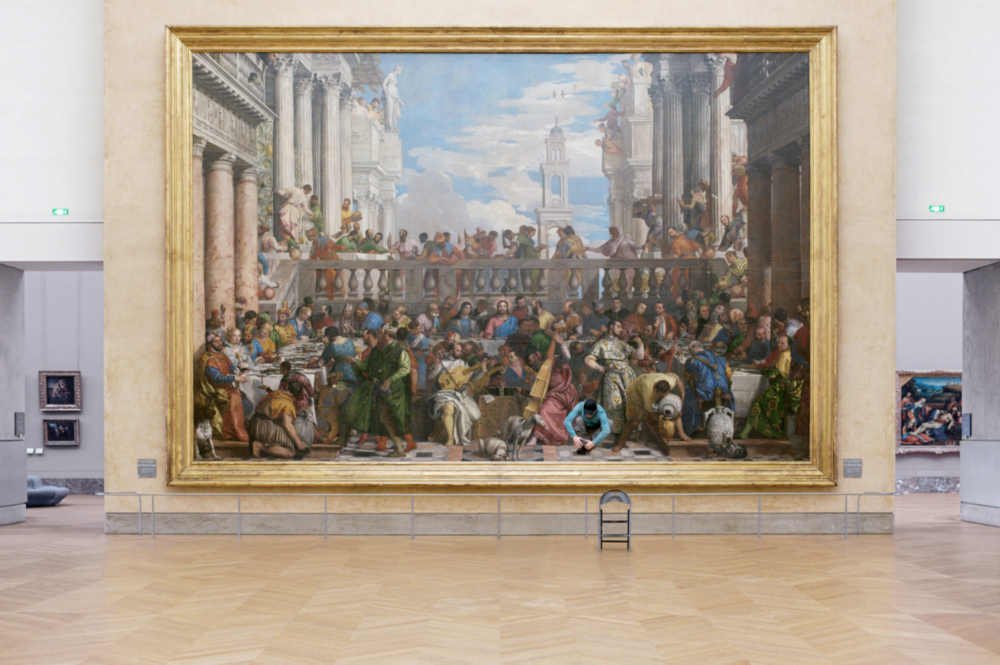 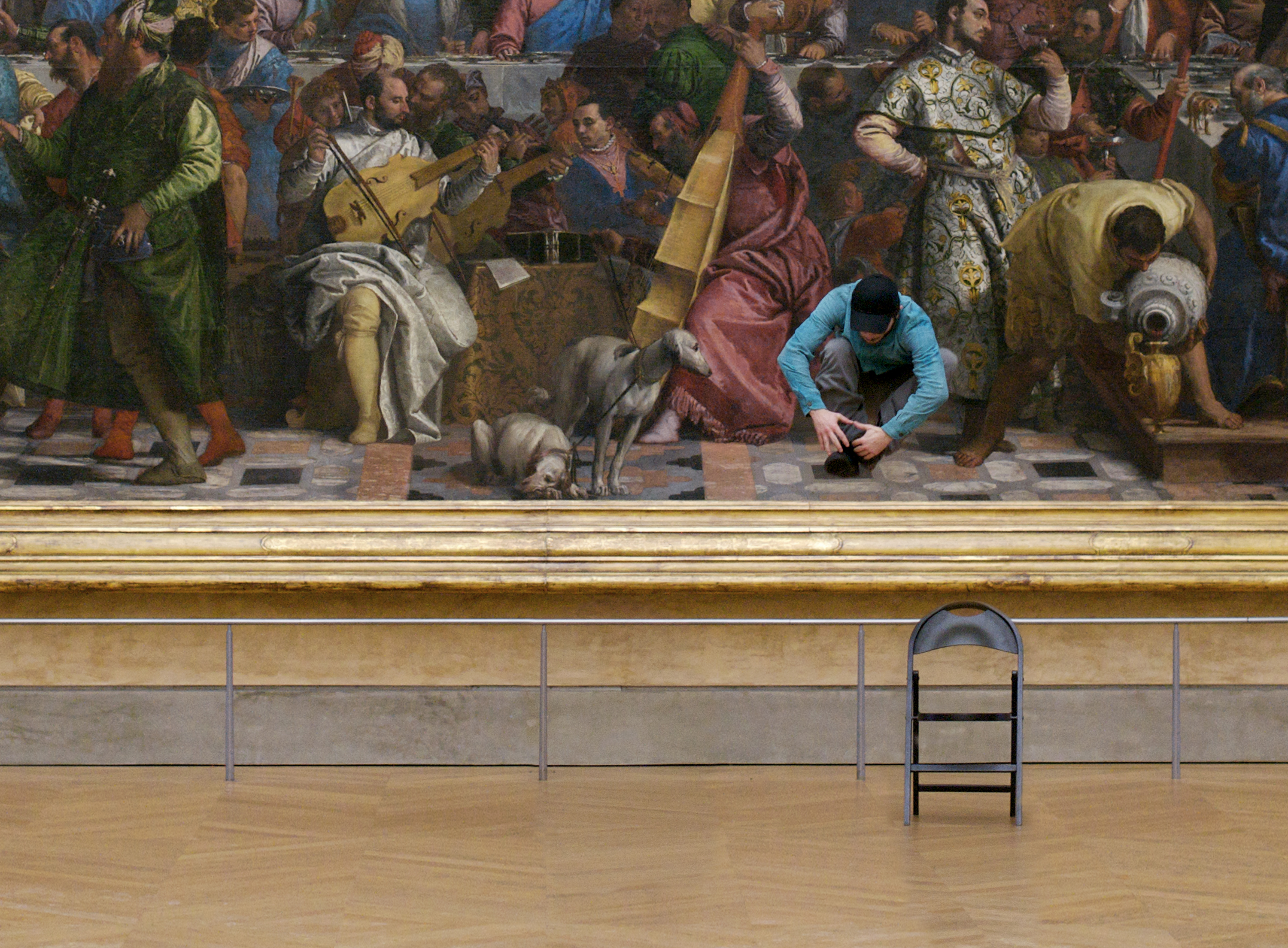 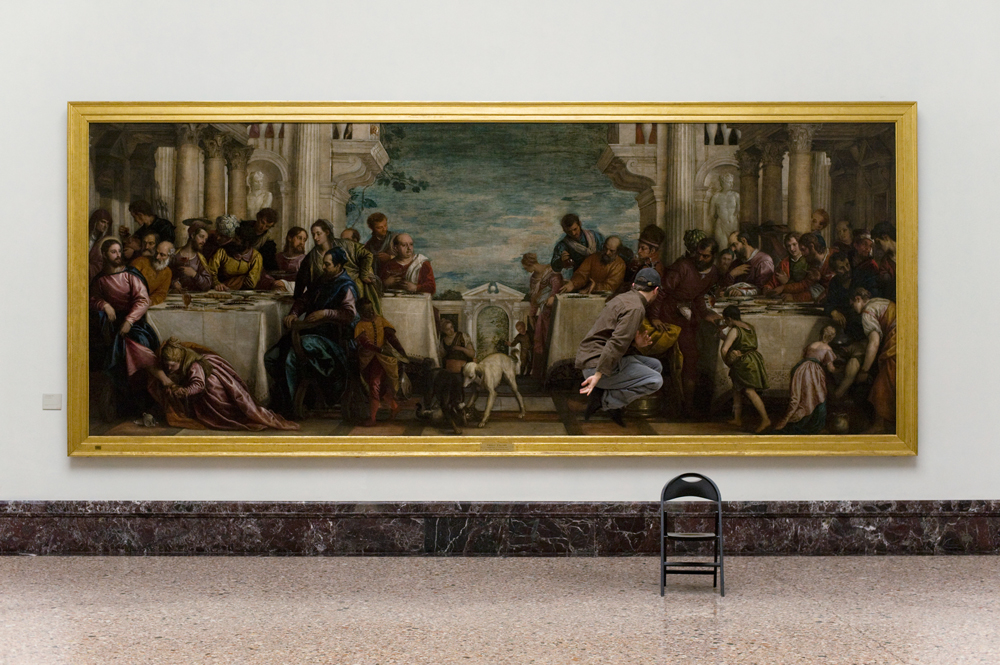 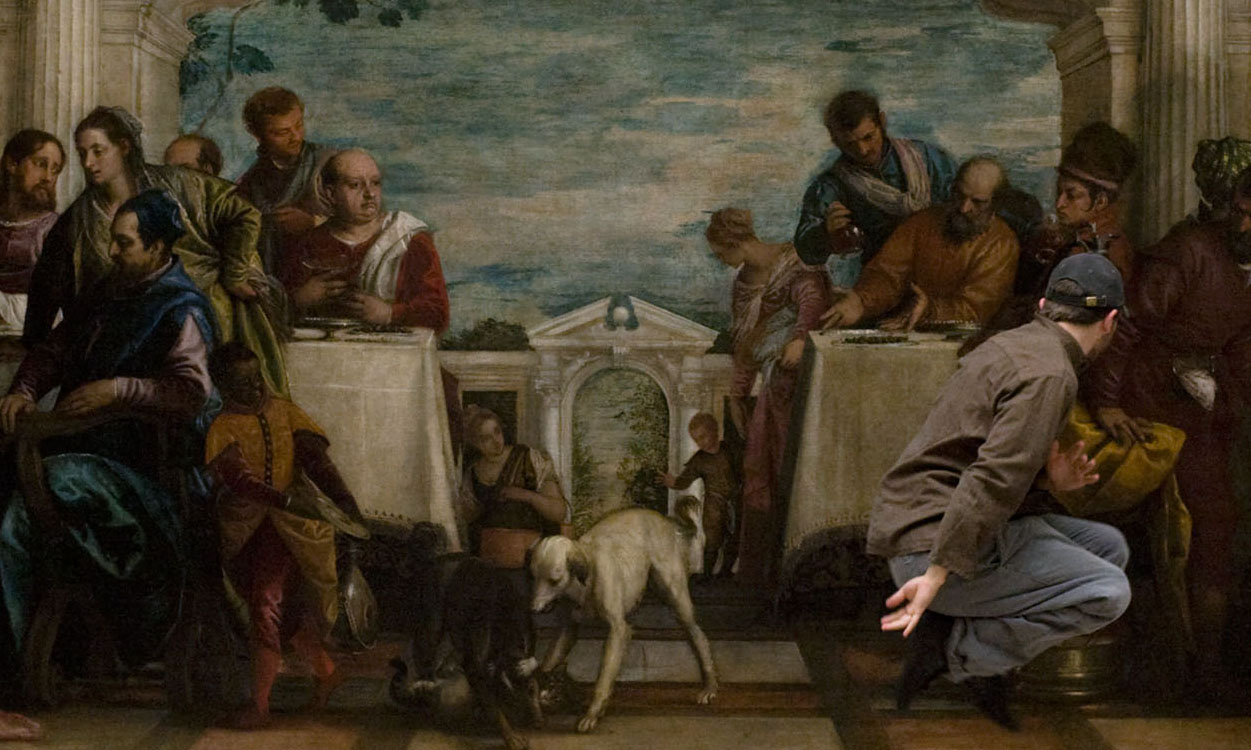 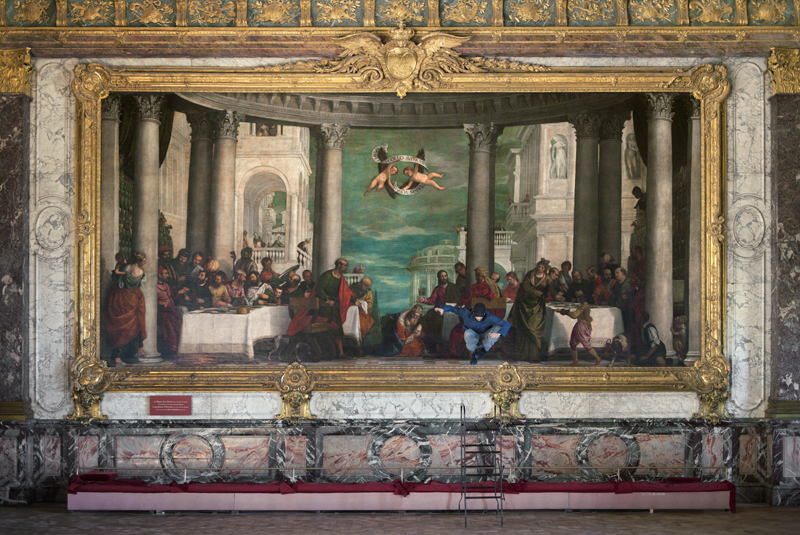 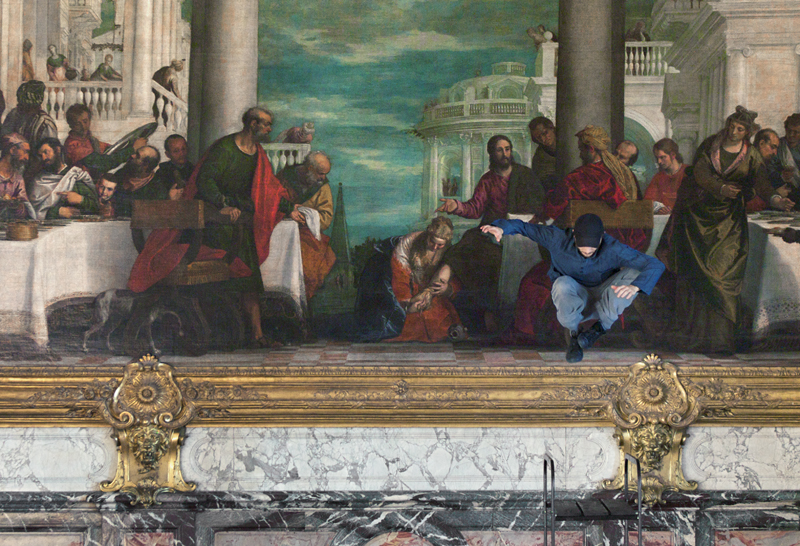 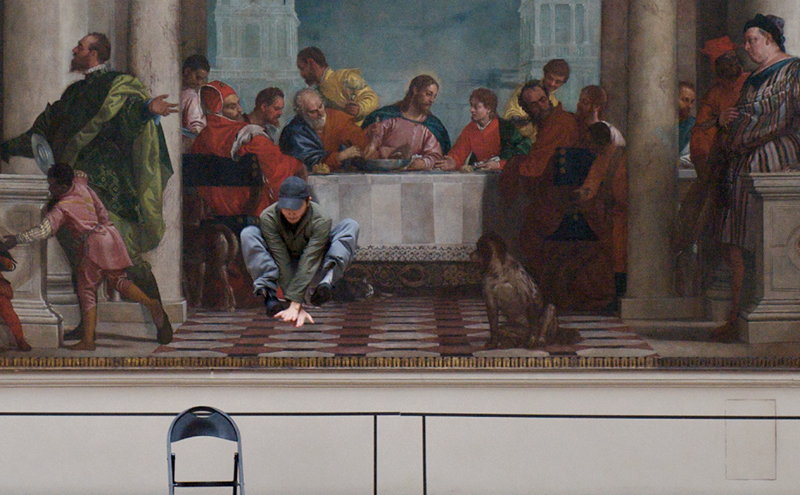 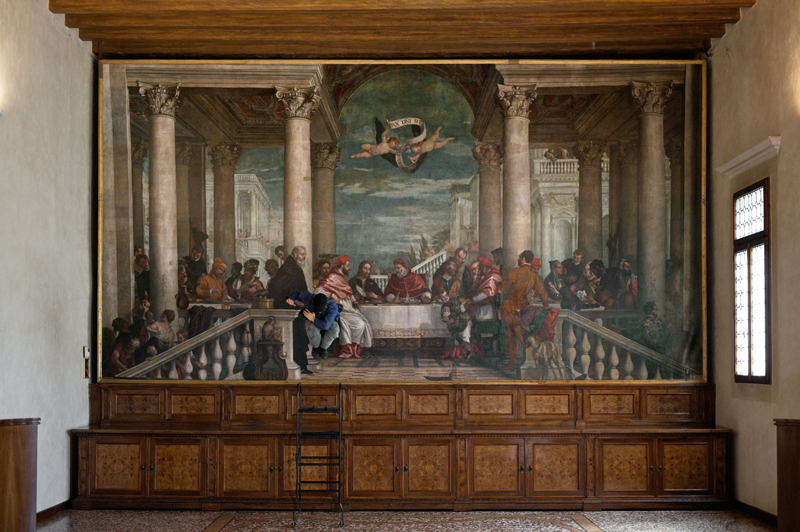 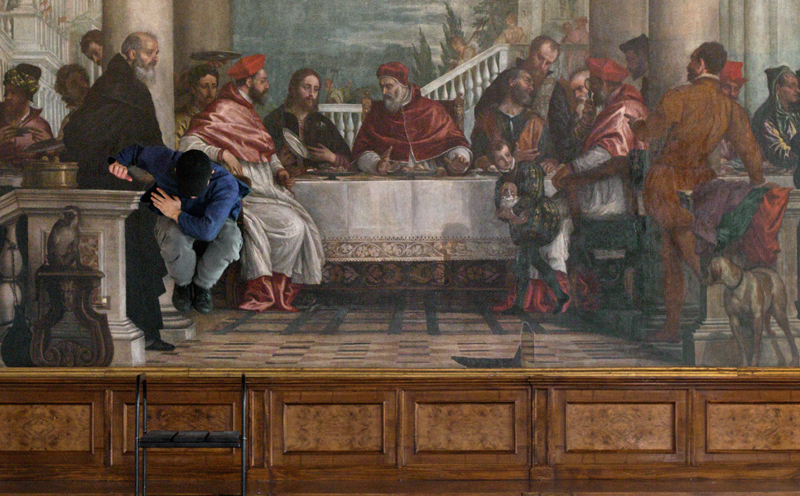 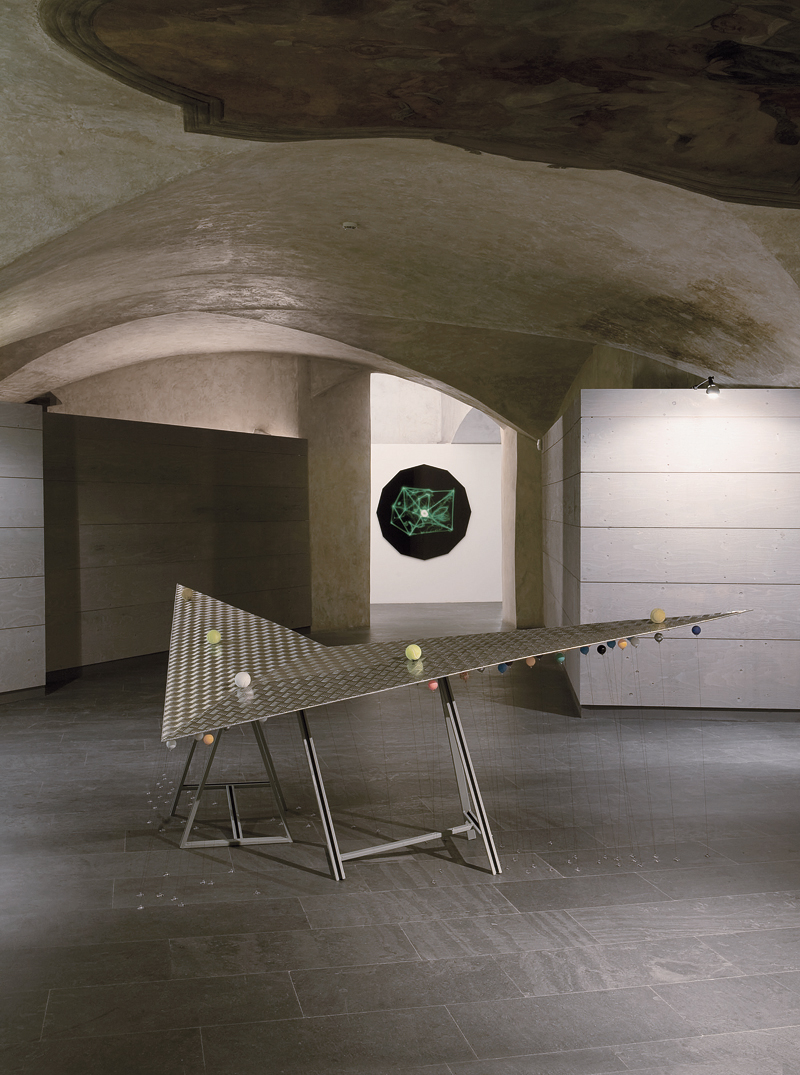 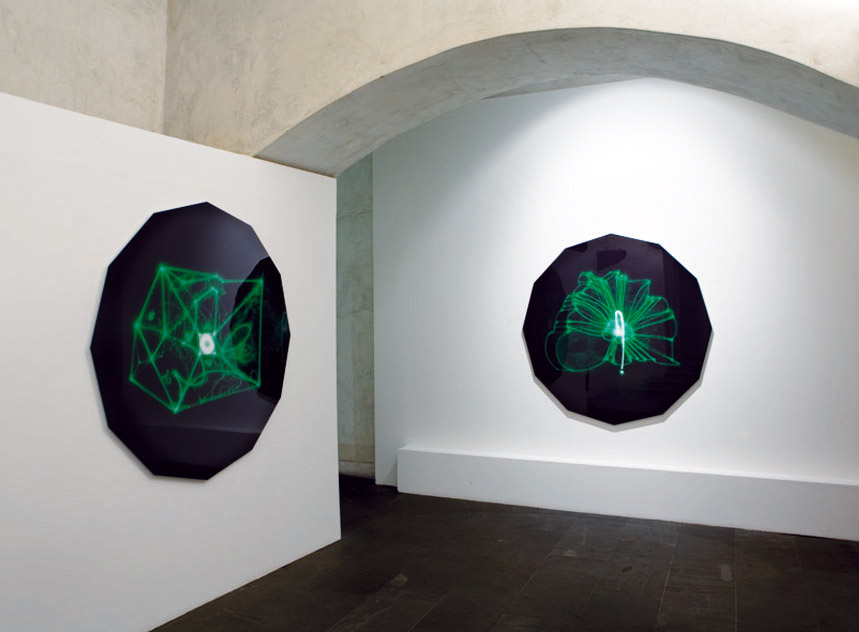 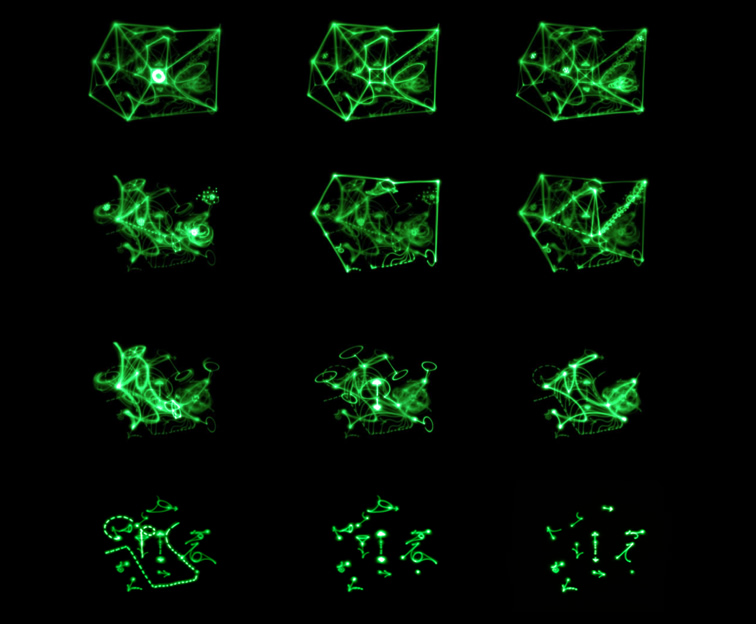 Steps of appearance of an UV led ephemeral drawings on a surface of phosphor paint. 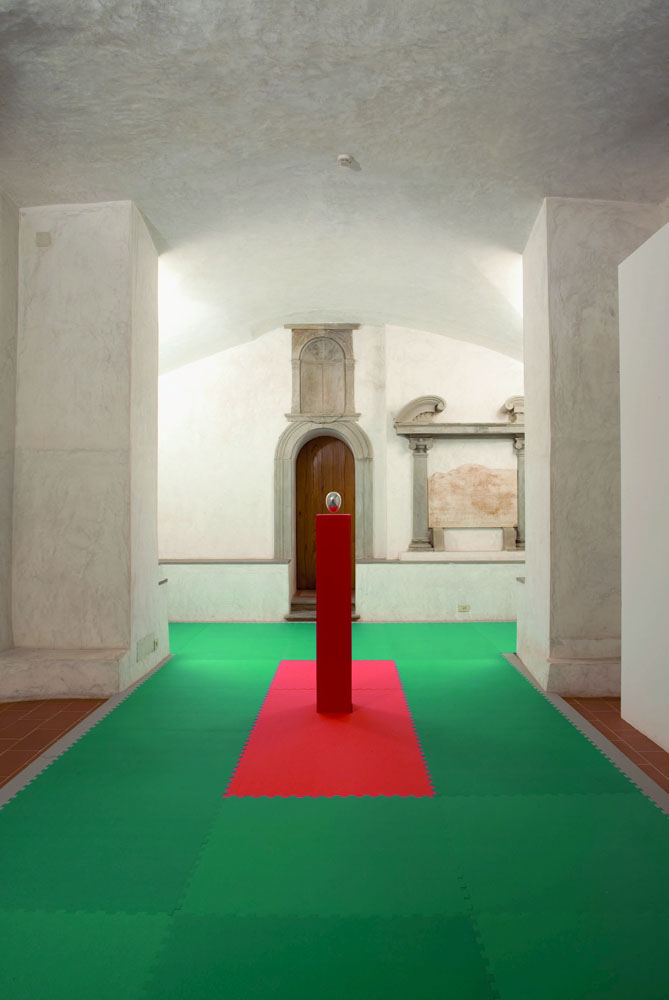 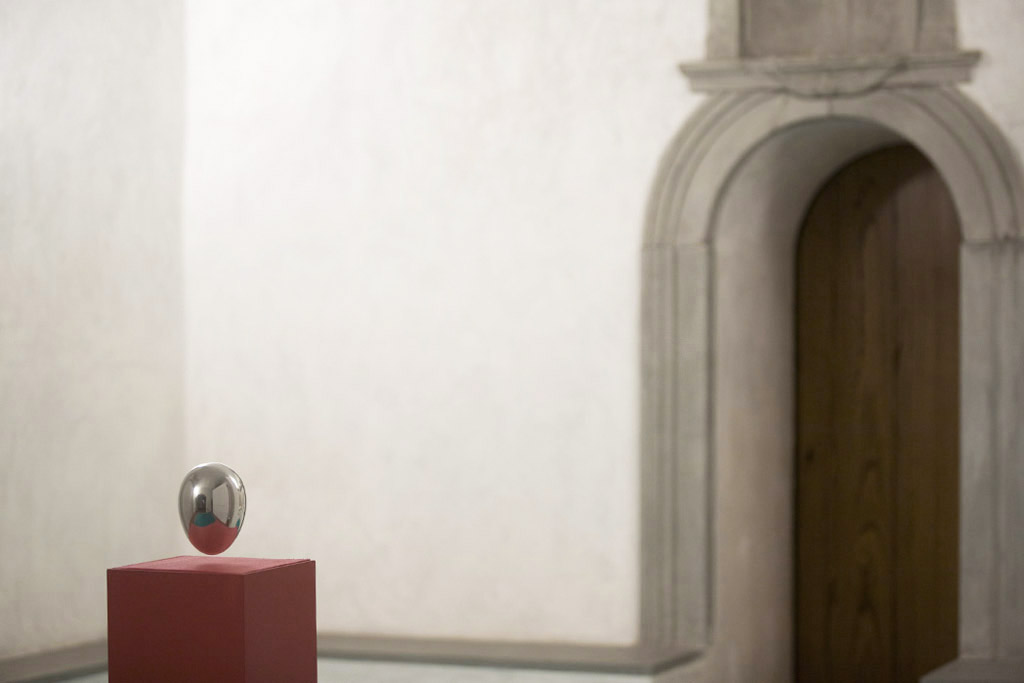 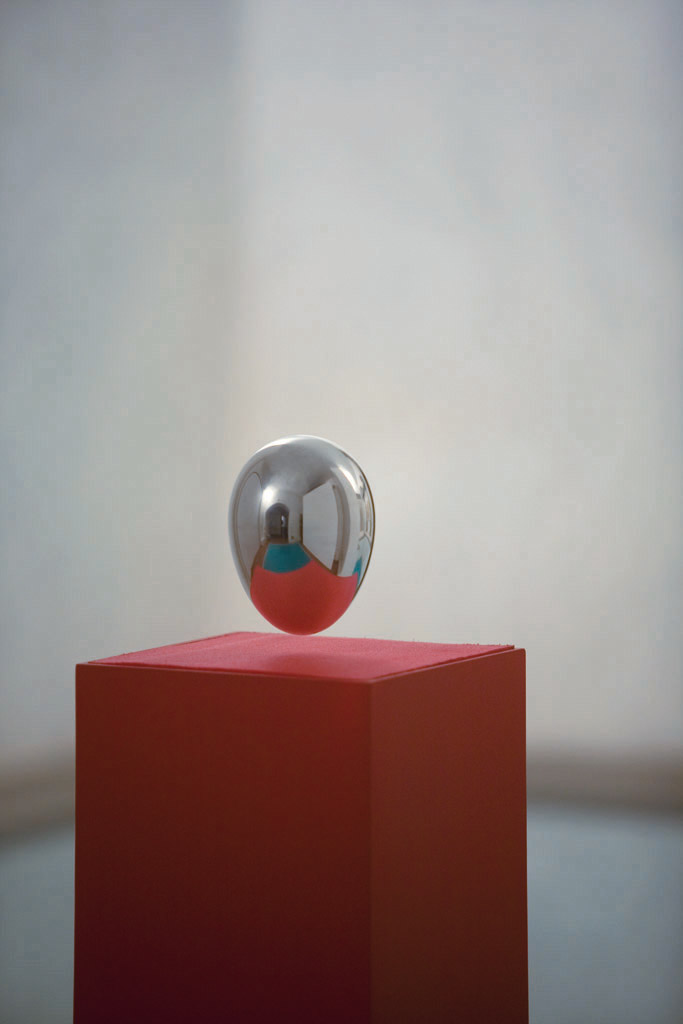 “The ALEPH Experiment was built to measure events created by electron positron collisions in LEP. It operated from 1989 to 1995 in the energy range of the Z particle (around 91 GeV) and later (1995 to 2000) above the threshold of W pair production (up to 200 GeV). Typical events have many particles distributed in jets over the entire detector volume. The event rate ranged from around 1 Hz at the peak of the Z to at least a factor hundred smaller at the highest energies. The ALEPH detector was therefore designed to accumulate, for each event, as much information over as much solid angle as was practical.

This was achieved by a cylindrical arrangement around the beam pipe with the electron-positron interaction point in the middle. A magnetic field of 1.5 Tesla was created by a superconducting coil 6.4 m long and 5.3 m in diameter. The iron return yoke was a dodecagonal cylinder with two end-plates that left holes for a focusing magnet (quadrupole) of the LEP machine. The iron was 1.2 m thick and was subdivided into layers that left space for the insertion of layers of streamer tubes. In this way the iron yoke was a fully instrumented hadron calorimeter (HCAL), which was read out in 4608 projective towers. Outside the iron, there were two double layers of streamer tube chambers to record the position and angle of muons that had penetrated the iron.

Inside the coil was the electron-photon calorimeter (ECAL), designed for the highest possible angular resolution and electron identification. It consisted of alternating layers of lead and proportional tubes read out in 73,728 projective towers, each subdivided into three depth zones. The central detector for charged particles was the time projection chamber (TPC), 4.4 m long and 3.6 m in diameter. It provided a three dimensional measurement of each track segment. In addition, it provided up to 330 ionisation measurements for a track; this was useful for particle identification. The TPC surrounded the inner track chamber (ITC); an axial-wire drift chamber with inner and outer diameters of 13 cm and 29 cm and a length of 2 m. It provided 8 track coordinates and a trigger signal for charged particles that came from the interaction point. Closest to the beam pipe, was a silicon strip vertex detector. For each track, this measured two pairs of coordinates, 6.3 cm and 11 cm away from the beam axis over a length of 40 cm along the beam line. The beam pipe, made out of beryllium, had a diameter of 16 cm. The vacuum inside was about 10-15 atm.[2]“

“Quantum tunnelling or tunneling (see spelling differences) refers to the quantum mechanical phenomenon where a particle tunnels through a barrier that it classically could not surmount. This plays an essential role in several physical phenomena, such as the nuclear fusion that occurs in main sequence stars like the Sun.[1] It has important applications to modern devices such as the tunnel diode,[2] quantum computing, and the scanning tunnelling microscope. The effect was predicted in the early 20th century and its acceptance as a general physical phenomenon came mid-century.[3]

“Schrödinger’s cat is a thought experiment, sometimes described as a paradox, devised by Austrian physicist Erwin Schrödinger in 1935.[1] It illustrates what he saw as the problem of the Copenhagen interpretation of quantum mechanics applied to everyday objects. The scenario presents a cat that may be simultaneously both alive and dead,[2][3][4][5][6][7][8] a state known as a quantum superposition, as a result of being linked to a random subatomic event that may or may not occur. The thought experiment is also often featured in theoretical discussions of the interpretations of quantum mechanics. Schrödinger coined the term Verschränkung (entanglement) in the course of developing the thought experiment.”

“In particle physics, Supersymmetry (SUSY) is a proposed type of spacetime symmetry that relates two basic classes of elementary particles: bosons, which have an integer-valued spin, and fermions, which have a half-integer spin.[1] Each particle from one group is associated with a particle from the other, known as its superpartner, the spin of which differs by a half-integer. In a theory with perfectly “unbroken” supersymmetry, each pair of superpartners would share the same mass and internal quantum numbers besides spin. For example, there would be a “selectron” (superpartner electron), a bosonic version of the electron with the same mass as the electron, that would be easy to find in a laboratory. Thus, since no superpartners have been observed, if supersymmetry exists it must be a spontaneously broken symmetry so that superpartners may differ in mass.[2][3]Spontaneously-broken supersymmetry could solve many mysterious problems in particle physics including the hierarchy problem. The simplest realization of spontaneously-broken supersymmetry, the so-called Minimal Supersymmetric Standard Model, is one of the best studied candidates for physics beyond the Standard Model.

There is only indirect evidence and motivation for the existence of supersymmetry. Direct confirmation would entail production of superpartners in collider experiments, such as the Large Hadron Collider (LHC). The first run of the LHC found no evidence for supersymmetry (all results were consistent with the Standard Model), and thus set limits on superpartner masses in supersymmetric theories. Whilst many remain enthusiastic about supersymmetry,[4] this first run at the LHC led some physicists to explore other ideas.[5] The LHC resumed its search for supersymmetry and other new physics in its second run.”