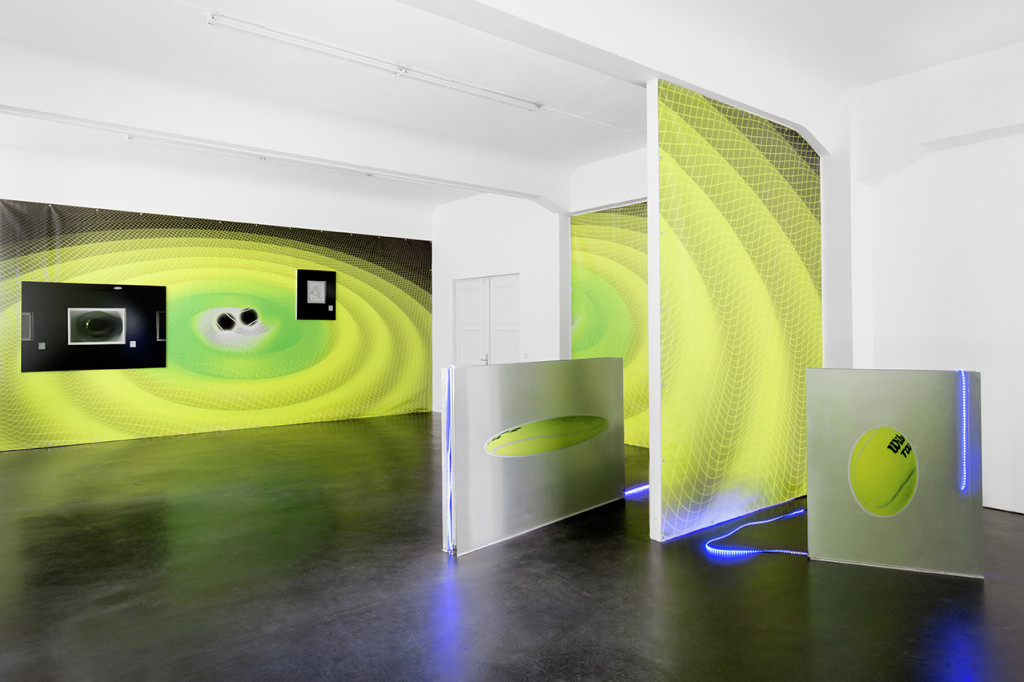 Movement unsettles the works in Luca Pozzi’s “Discovery and Premonition,” his first solo exhibition at alexander levy. For Pozzi, movement, and the resultant distances it produces, is a form of communication. From the firing of one neuron to another in Stephen Hawking’s mind when he predicted that black holes emit radiation in 1974; to the recently documented cosmic ripples of gravity that have travelled billions of years to reach us; to the flow of quantum particles which moved through components of CMS detectors from CERN’s Large Hadron Collider sitting on the gallery floor; to the tennis and ping pong balls frozen as image or held by magnets, their travel through space and time paused, expanded. For movement to come into discourse, for it to become historical, it needs to be categorized and differentiated, after it is imagined and observed.

The space between discovery and premonition, between witnessing of a fact and the feeling that it will happen, is the distance between the observed and the imagined. We might call it the virtual realm. In Brian Massumi’s usage, it is an immaterial space of potential that is knowable not through our senses, but rather, it is felt. It is energy before it becomes matter. To be alive to this space and to make work about it as Pozzi does, is to signal a series of possible moments – the heres and theres, the befores and afters – and in doing to, imply movement between them. In a series of photos, we see images of a tennis ball captured the moment it passes in front of a number of Lucio Fontana paintings. The paintings appear to blur around the ball like some kind of wormhole or whirlpool. The blur in fact combines two moments: the moment the ball passed in front of it, and the 22-years until the copyright for Fontana’s works expire.

In the months during the exhibition’s preparation, Luca told me about his interest in the Discovery Channel. (He mimics the network’s logo, but replaces the Earth with a tennis ball.) There, scientific findings are reconstrued and presented to a viewing audience. Similarly, much of the work in this exhibition is the result of Luca’s long-term collaborations with the CERN community, transforming their language into new cultural forms. The world of measurements and observations is translated into narratives, drama, and experience. “Discovery channel” also suggests that scientific discoveries need to be channeled or mediated to be understood. Communicating with the spirit world – a parallel reality – is also called channeling, and it is done through a medium. Faith and intuition demands communication, a conduit to experience. That most of the Discovery Channel’s viewers watch it on television, if not on their computers, makes it something we experience behind glass, a screen, like an aquarium – a second hand experience, taken by faith, seen but not lived.

Listening to the simulated cheeps and chirps of a gravitational wave pass through our detection, both Luca and I, separately, thought the sound resembled a gibbon call. Somehow, the sound of two faraway black holes merging has existed amongst us all along. The gibbon’s song, with its distinctive bird-like grace note endings, is the premonition to our recent cosmic discovery. In Thai folktales, gibbons are reincarnations of disillusioned lovers – their calls are cries of longing from another world. In Chinese and Japanese Zen paintings, gibbons grasping at the reflection of the moon in the water was a favorite motif.

Gibbons are playful creatures, and in a similar way, to truly grasp at the ways abstract, faraway scientific observations affect our experience requires a sense of intellectual amusement, an alacrity of thought. The image of these apes easily, powerfully, swinging from branch to branch, from perch to perch, conjures the beauty of a life lived in motion. I think of the fleeting comprehension that accompanies sustained thought – the vanishing moments of clarity that play on my mind when I form ideas – and I think too of Luca’s Oracle Blue Windows (2014), photo documentation of florescent symbols momentarily marked with a UV laser on a photosensitive screen, set up on the moonscape in the area around the Dead Sea. Gibbons maintain a partner for life, and I think of the pair of tennis balls representing the pair of black holes spinning around one another in Luca’s show. And the ping pong balls, held in mid-air by an invisible force, animate a spatial gap. We do not sense the magnetic forces drawing them together, but we feel the tension between two bodies held apart.

Wilson Tour Loading is a photographic work involving the works by Lucio Fontana exhibited at the Museo del Novecento in Milan, and at Reina Sofia in Madrid. A tennis ball, thrown in front of Fontana’s works, are photographed in mid-air, creating a new work combining the temporality of an instant, with that of an artistic career. Part of Fontana’s continuing artistic life, after death, includes the image copyrights of this works, valid till 2038. Pozzi applies a radial blur around the ball in his photograph, producing a legal and artistic space where both his intentions, and Fontana’s copyright are simultaneously maintained. 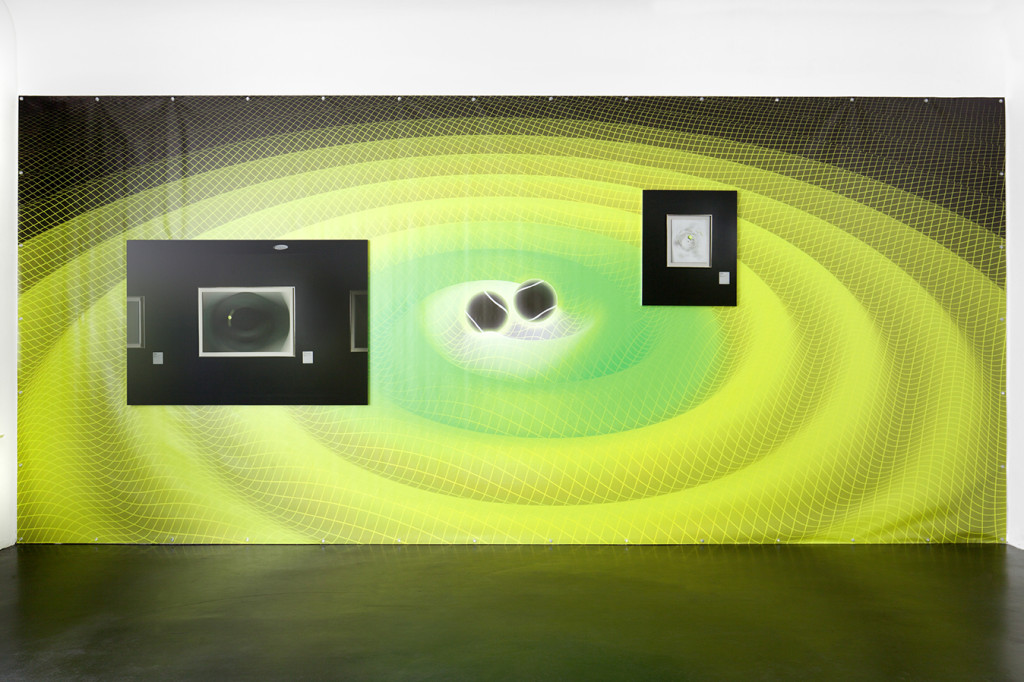 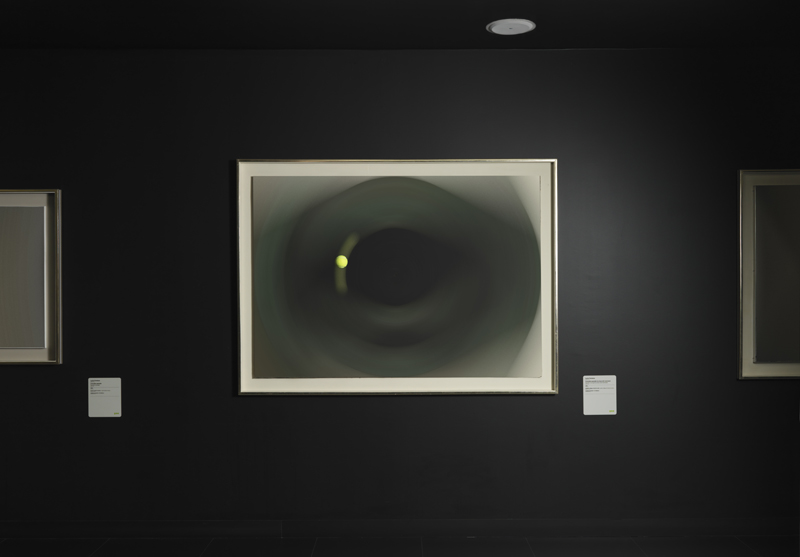 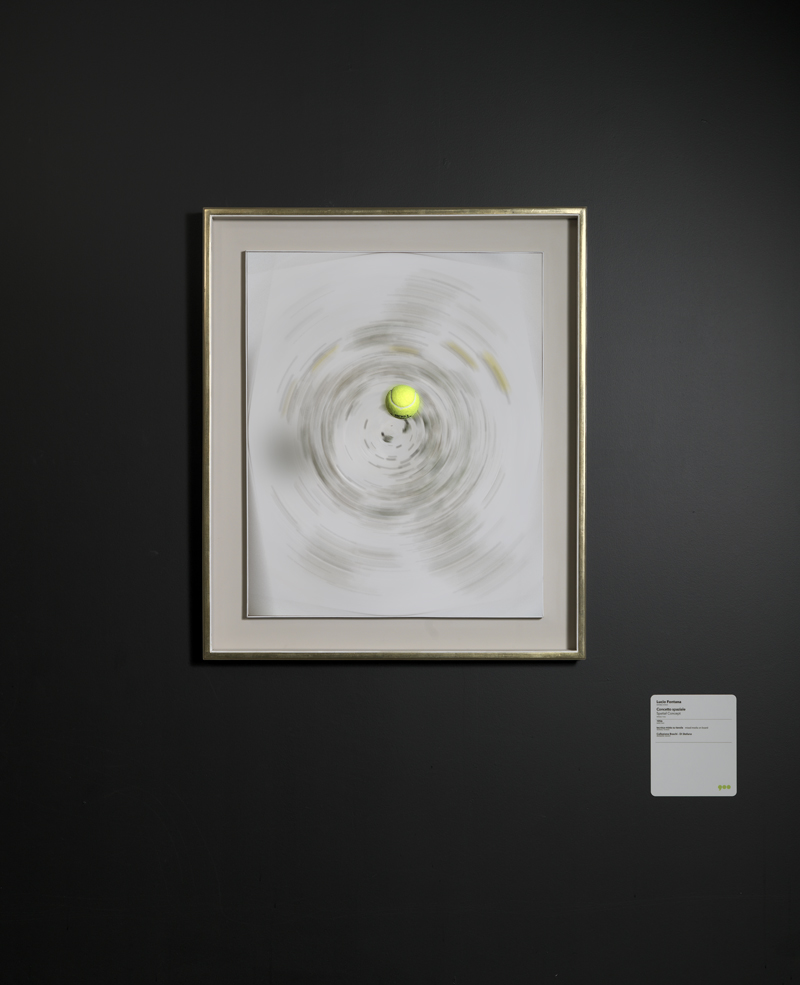 The wall-mounted, metallic-blue polygon covered with magnetically suspended ping-pong balls, called Detector, was inspired by the microscopic dimensions under investigation at the Large Hadron Collider at CERN, in Geneva. Twelve-sided, like the LHC, the work suggests an alternate way to artistically and intellectually access the often obscure processes at work in particle physics detectors. Through Compact Muon Solenoid (CMS) experiments, physicists at CERN search for theorized but yet unobserved elementary particles – the miniscule building blocks that help explain the mass of dark matter, and the nature extra dimensions. 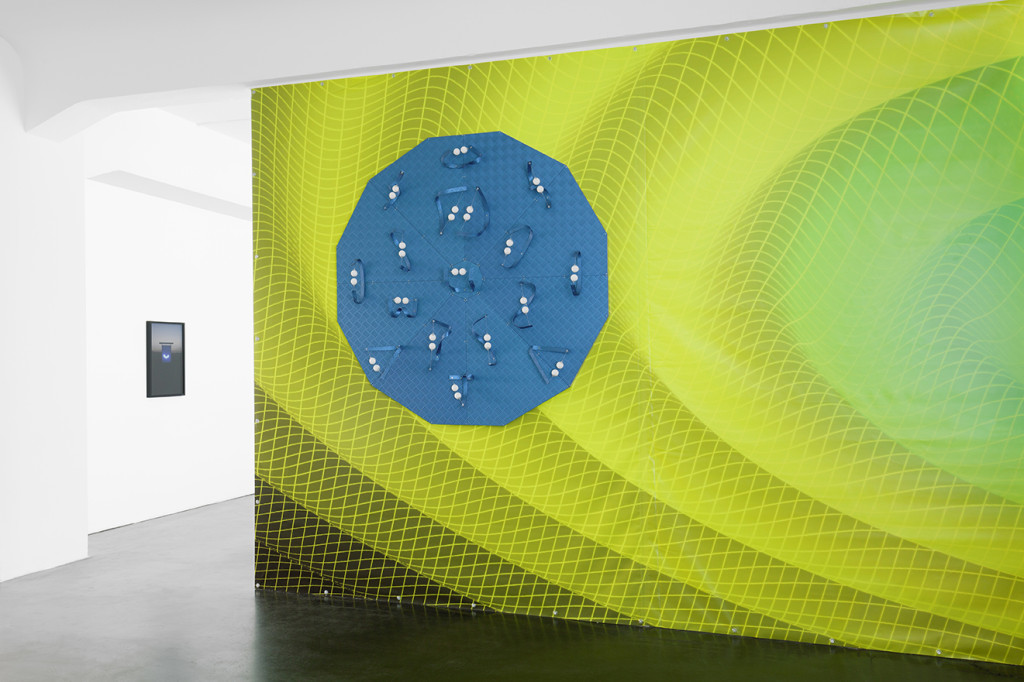 This series assembles the various registers of motion operating in the exhibition. Theoretical physicist and cosmologist Stephen Hawking’s portrait is reproduced on commercial PVC, and affixed to the wall with a magnetized ping-pong apparatus – his eyes seemingly fixed on the space between the balls. Much of Hawking’s theoretical writing about black holes has been instrumental to Pozzi’s work for the past several years. Stephen Hawking Series draws our attention to a set of asymmetries. Known for his radical, progressive and dynamic thinking, Hawking is nevertheless rendered virtually motionless and wheelchair bound due to neural disease. The mind that theorized some of the most energetic entities in the universe also occupies an immobile body. 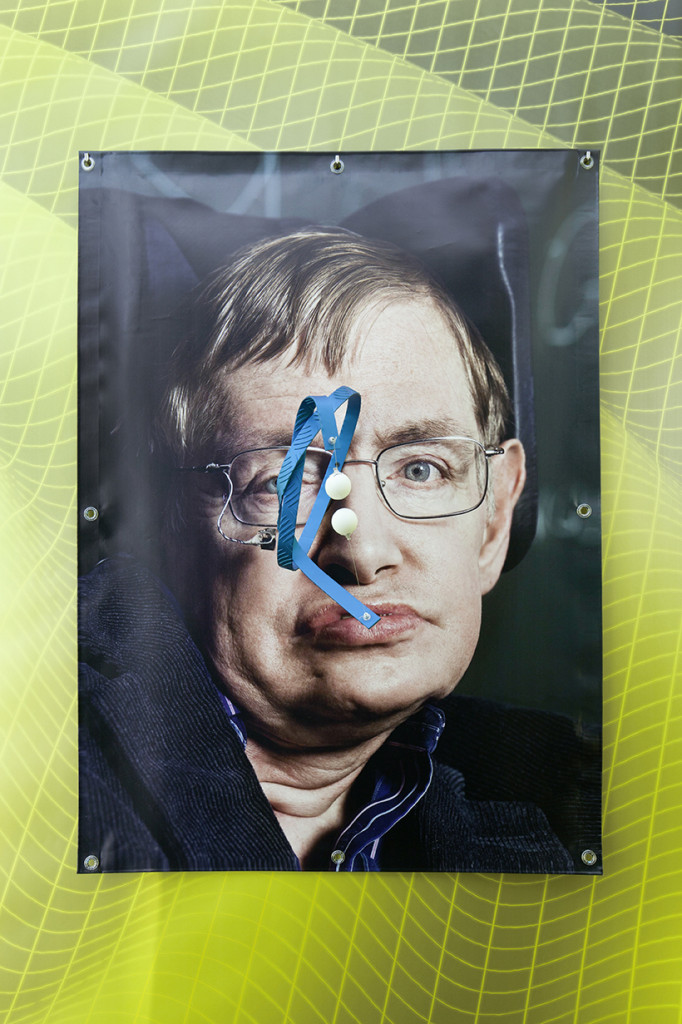 In 2014, with the Eternal Internet Brotherhood, Pozzi traveled between Palestine, Israel, and Jordan to conduct a number of artistic experiments. The photographs making up Oracle Blue Windows, are documentation of a performance done on site. A photo-sensitive screen was set up in the barren landscape, on which Pozzi “painted” nine different symbols in light using a UV laser. Like Wilson Tour Loading, these works collide space and time. The ephemeral “space-time emoticons” are now photographically fixed images, as the Dead Sea landscape takes on new narrative meanings. 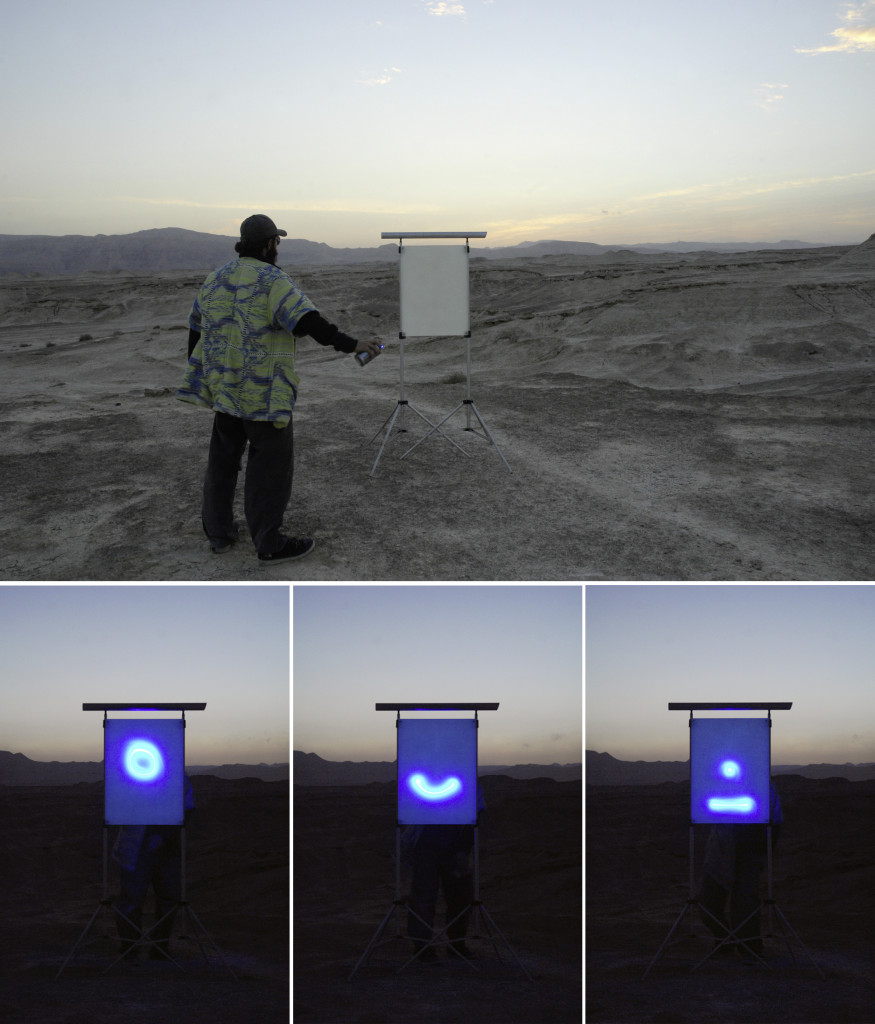 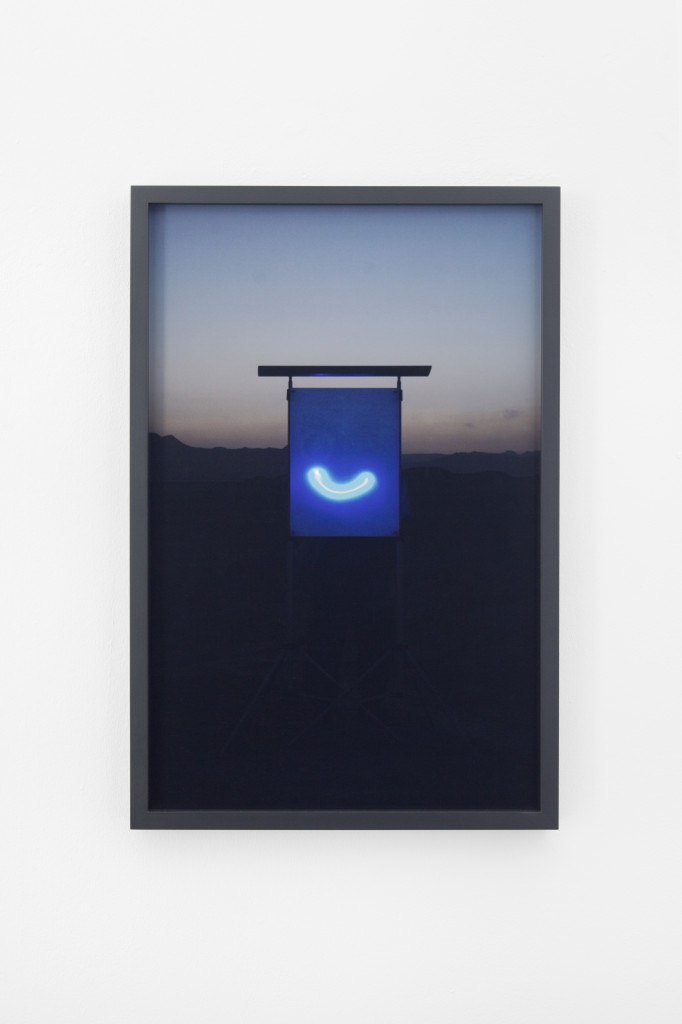 The aluminum slabs comprising Superlayers are actual components of the CMS detector in the Large Hadron Collider at CERN. Produced in Turin by INFN, they were intended to record the collision of two particles accelerating towards one another in the collider. These components rarely leave CERN’s premises, and were given to Pozzi as part of the cross-disciplinary engagement he has with the scientific institution. 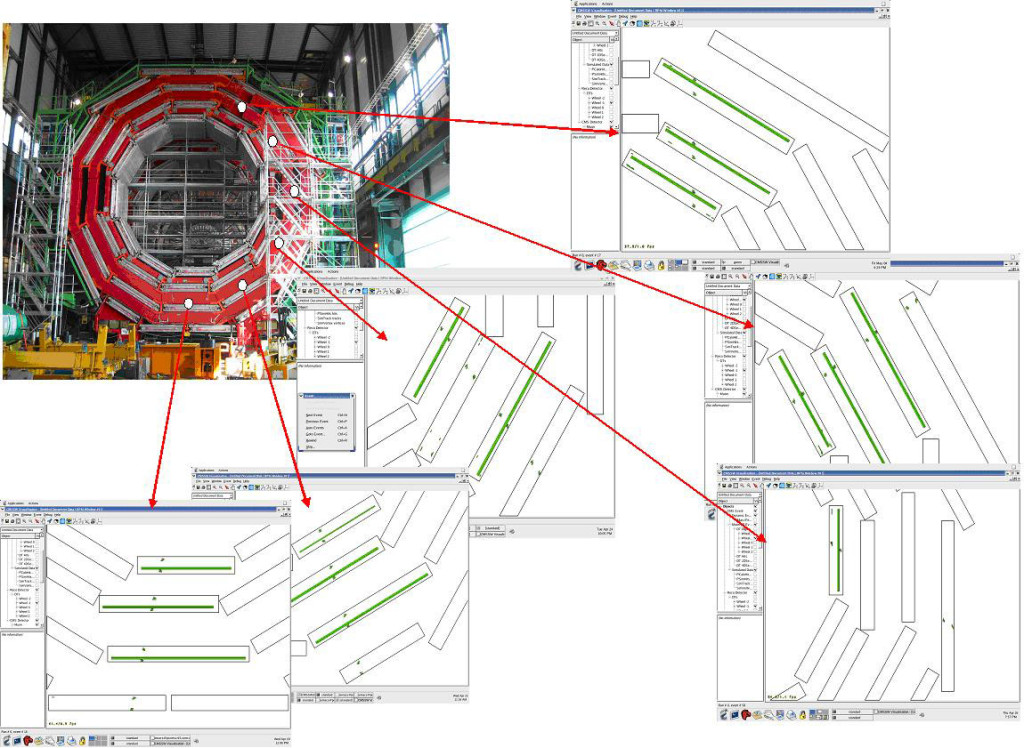 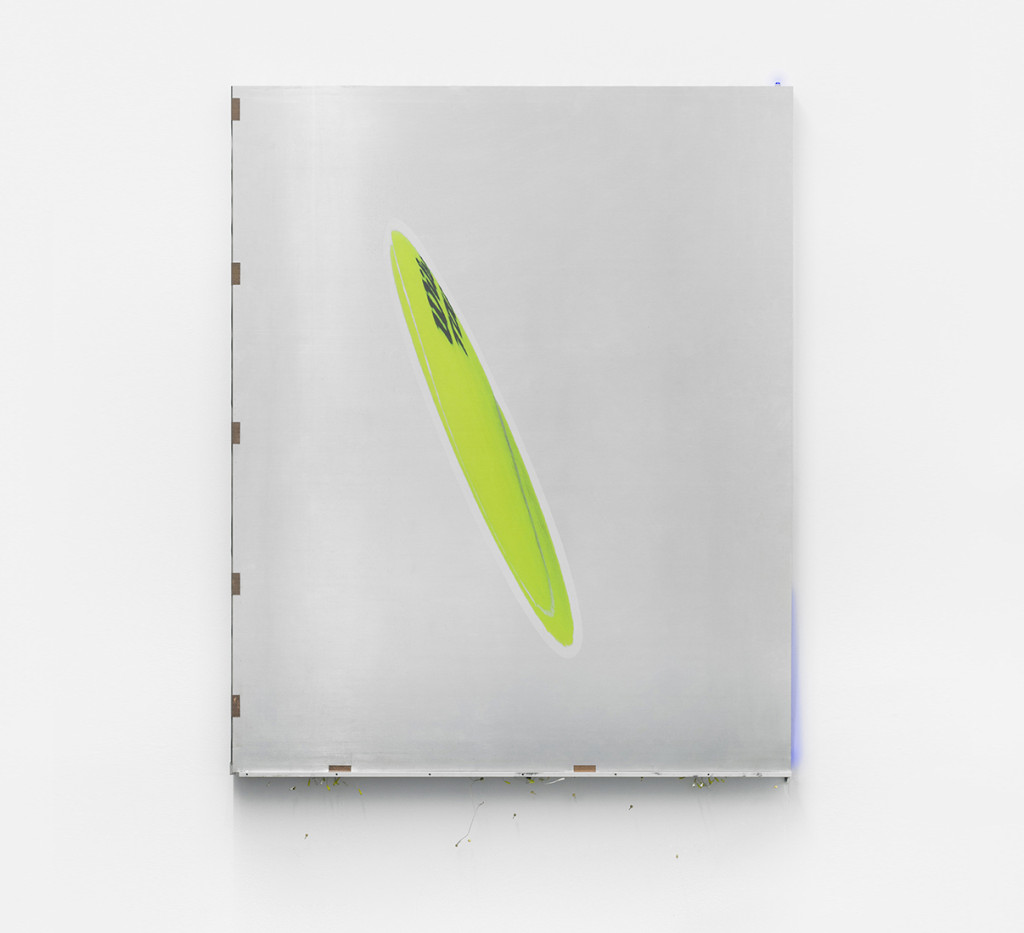 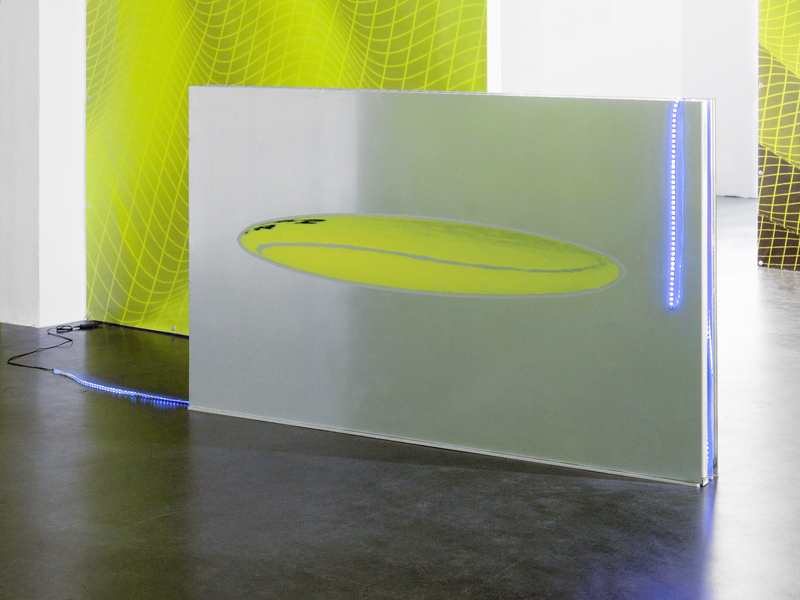 Displayed using a moltitude of speakers located in different places of the space . The Discovery and Premonitions installation recreates a three-dimensional sound environment that plays on the ambiguity between Gravitational Waves and the primitive Gibbons’s chants recorded by users around the world and collected by Luca Pozzi in an I-tunes playlist of 28’03”.