T.M.O.G (THE MESSAGES OF GRAVITY)

The exhibition unfolds a dialogue between installations, prints and further works with the aim of reconstructing and connecting the “environment” experienced by the artist between 2011 and 2012 in the occasion of a series of residencies that took place at renowned theoretical physics institutes as the Albert Einstein Institute in Berlin, the Perimeter Institute of Waterloo in Ontario (CA) and the Penn-State University of State College with the Berlin art space.

To do that Luca Pozzi acts first of all on the functional aesthetics of Grimmuseum adding references coming from his cross-disciplinary experience. As it is for example the case of the exhibition space windows covered by the artist with a translucent gold filter as suggested by the design of the architecture that he saw in Canada during his stay at PI. Or as the case of giant wall paper called “Lesson #01” showing the photographic documentation of a chalk drawing performance realized in 2012 on the “Mike Lazaridis Theatre of Ideas” giant black board of the same theoretical physics Institute.

Following this intuition Luca Pozzi’s  discloses, the cover of a scientific magazine realized in collaboration with the legendary researcher Abhay Ashtekar and his brand new project “Oracle” developed over more than two years of scientific, academic and artists collaborations within the fields of Loop Quantum Gravity, String Theory and Non Commutative Geometry. In pursuit of crossing paths and hybrid efforts, The Messages of Gravity asserts a fruitful exchange within the fields of knowledge, showing unusual methods of communication between nodes of different disciplines and questioning our realm of reality.

The door-like shape of Oracle verges between an imaginative technological monolith and a gateway for multi-linked spaces, preserving and exchanging information beyond the linear conception of time. Thanks to a light-sensitive surface and through a detection and transduction system, the physical phenomenon induced by Pozzi, replays itself by remotely following an analog-to-digital-to- analog transmutation. By means of a forthcoming development, the motions loop over on satellite devices marking the screen with a physical and metaphysical presence. The potentiality of Oracle lies in a structure capable of generating equilibrium and constant accumulation whilst conserving information accessible “simultaneously” from multiple locations in a sort of cloud computing and nonlinear structure.

In 2011 Pozzi set his action on a earlier prototype of the master device of Oracle in the desolate region of the northwestern State of Washington (USA). The video-documentation of this encounter lets out the suspended climate of a silent dialogue withstanding straightforward comprehensions or rather favoring individual interpretations of an autonomous cryptic language. In the last decades the dichotomy of the general relativity/ quantum mechanics have been bridged resulting in new exiting Quantum Gravity hybridizations. Linking this gap requires an intuitive leap, an acceptance of the existence of a topological structure beyond the energy barrier between classical and experimental physics. With Oracle, Pozzi tries to pose this question leaving the field free for further considerations.

“T.M.O.G” project also presents: a selection of the photographic series “Supersymmetric Partner” were is visible the artist jumping in front of the Renaissance paintings of Paolo Veronese showing the camera’s ability to capture a moment suspended between a plurality of different times and “Wall String #09” – composed of hand-bended almond aluminum, magnets and Ping-Pong balls – call to mind the manifold movements and interaction of particles or spin vectors. The stasis of the balls suspended in perfect equilibrium marks a path in a geometric and pre-geometric structure, resembling the way information and data spreads around the world even before space-time.

Obtained mapping the researchers hands by means of a uv led lamp and a tablet treated with phosphorus based painting, The Quantum Gravity Cave is the last work exhibited in the show. Is composed by a series of lambda print on plexiglas and is aimed at connecting the extreme research in theoretical physics to the contemporary art system through the use of an ancient language that is underneath every creative process: the cave paintings. Started at the beginning of 2010 at La Faculté des Sciences de Luminy in Marseille, and then developed at the Albert Einstein Institute of Berlin at the C.I.S.C. (Consejo Superior De Investigaciones Cienfìcas) in Madrid and finally in 2012 at P.I. is currently constantly being updated. 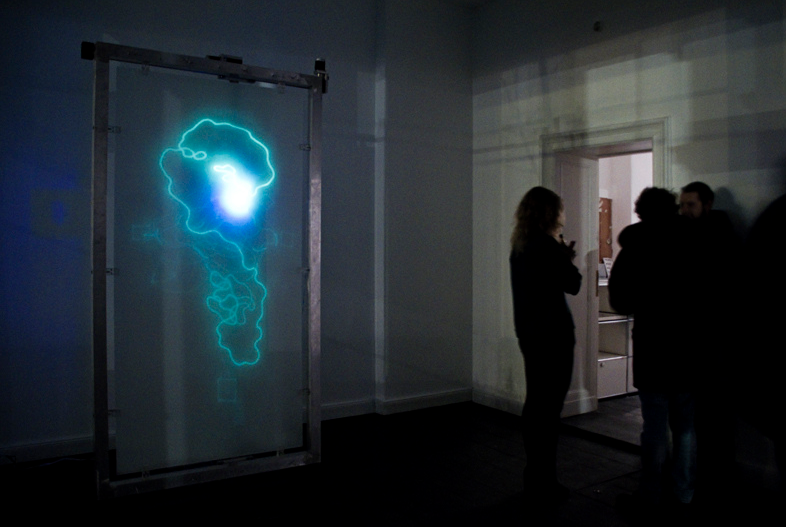 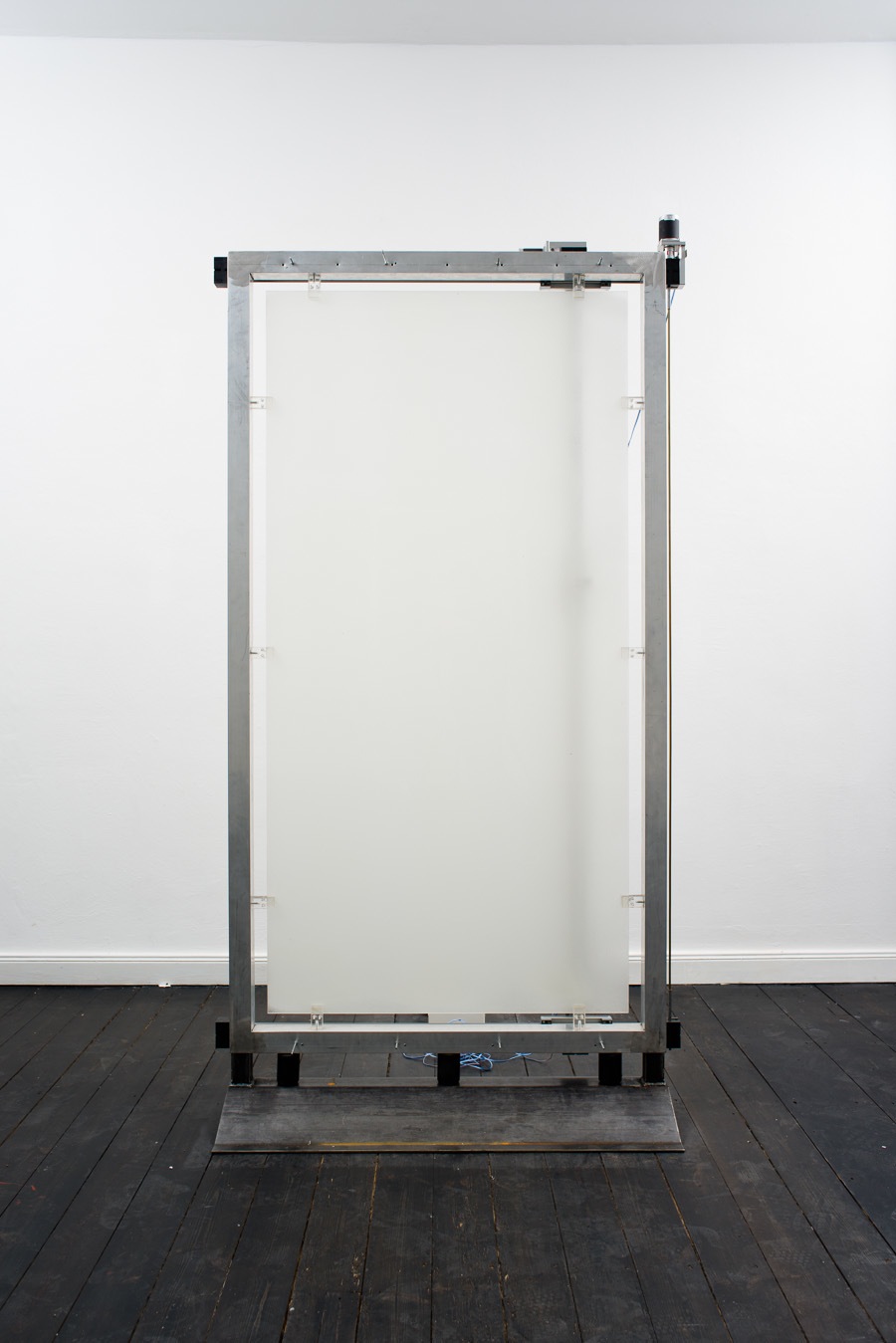 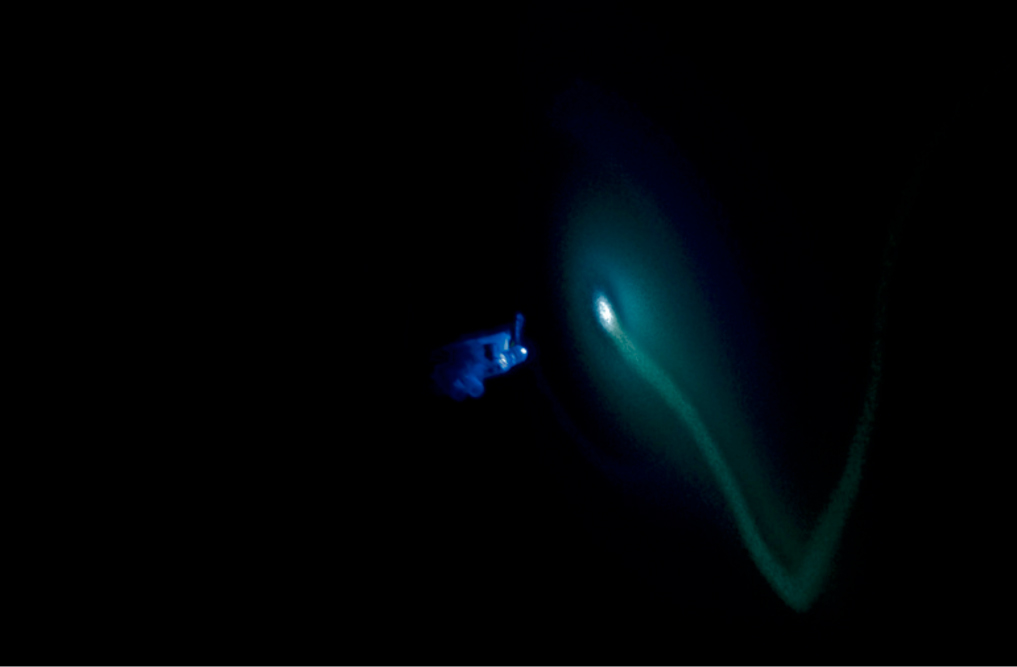 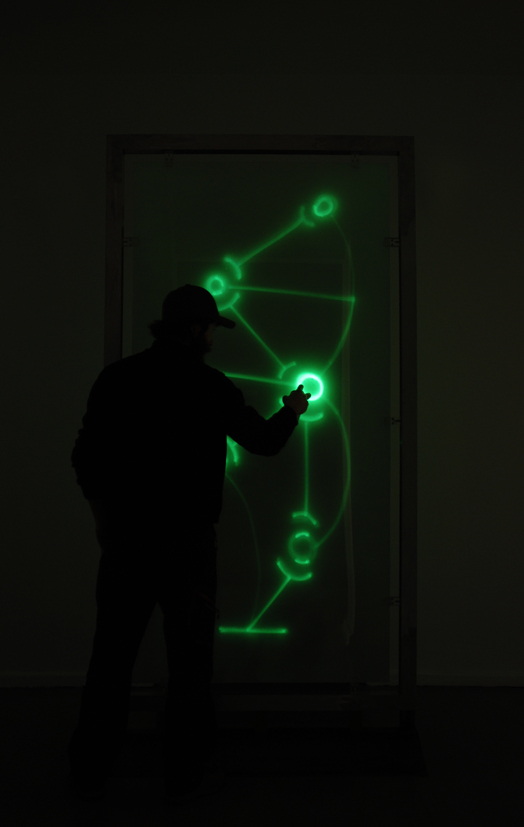 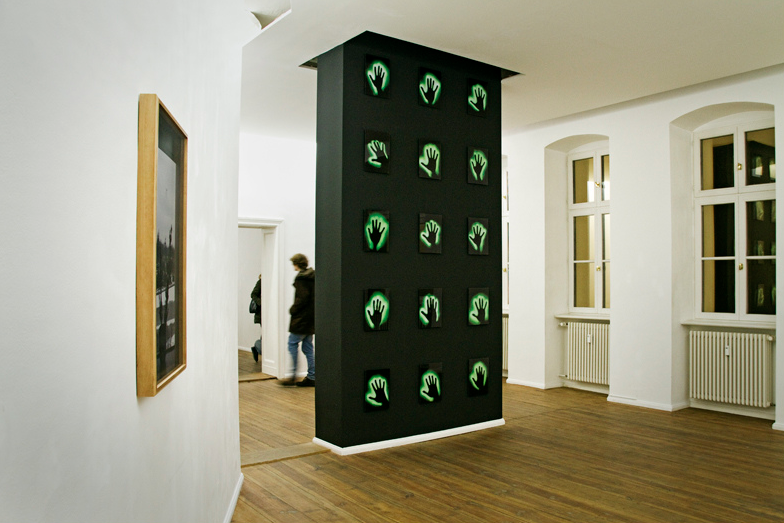 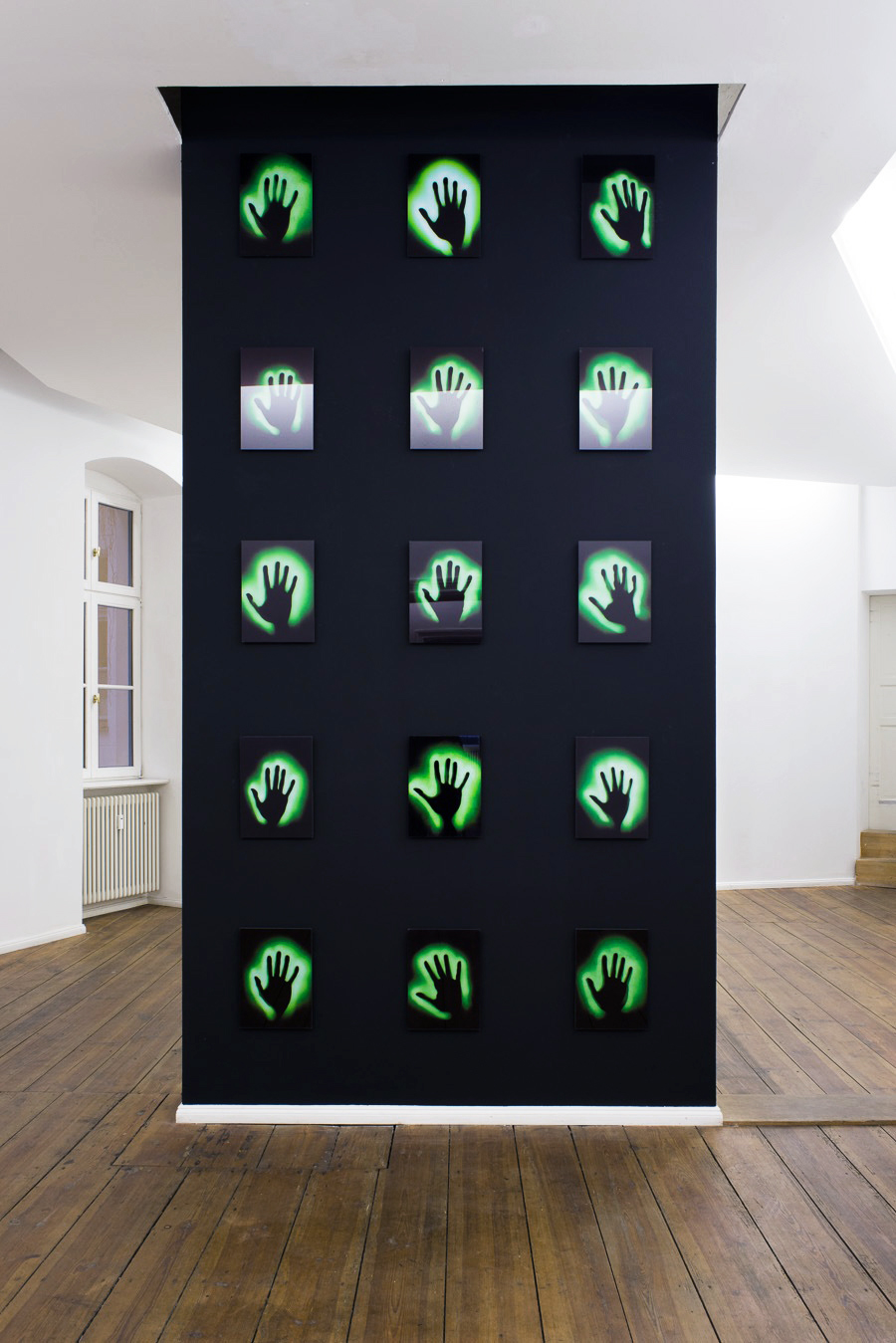 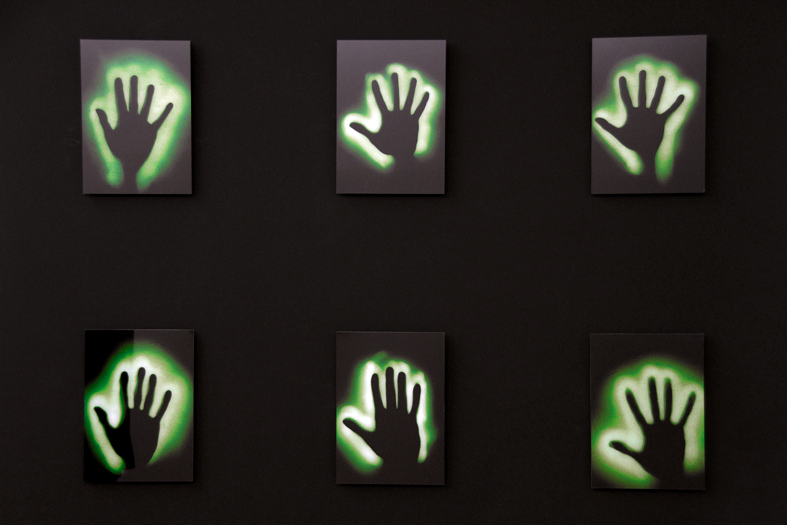 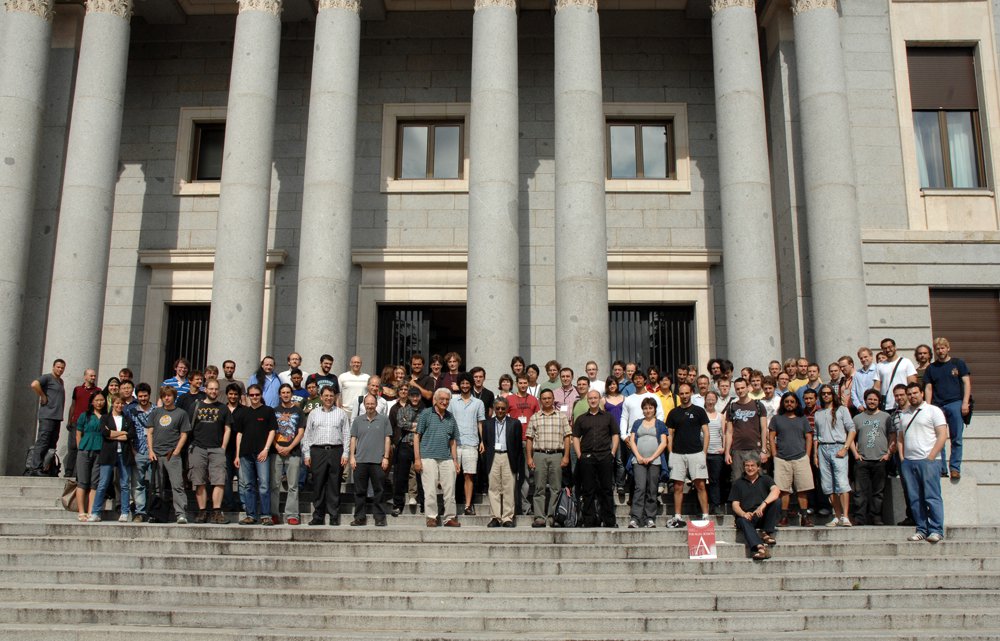 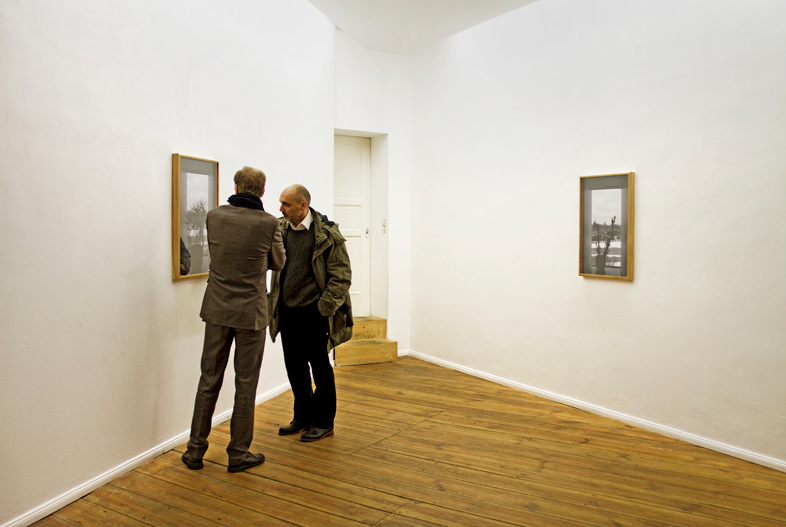 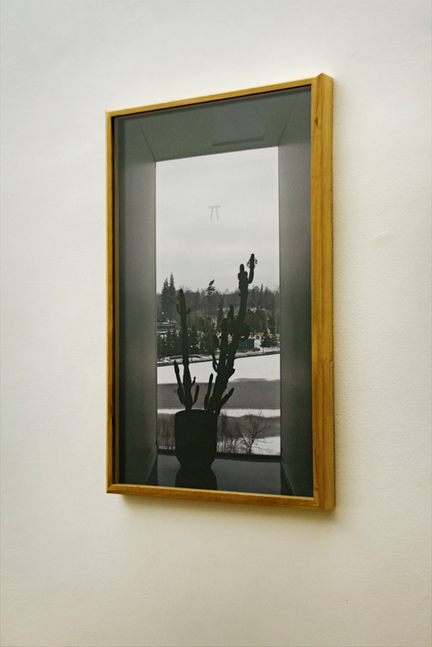 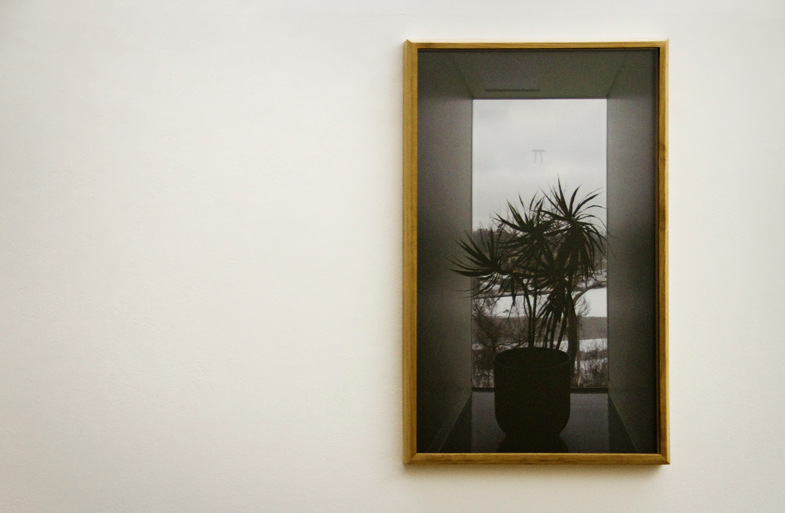 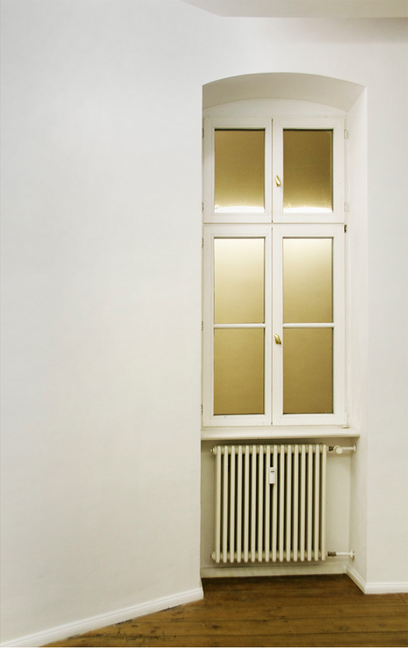 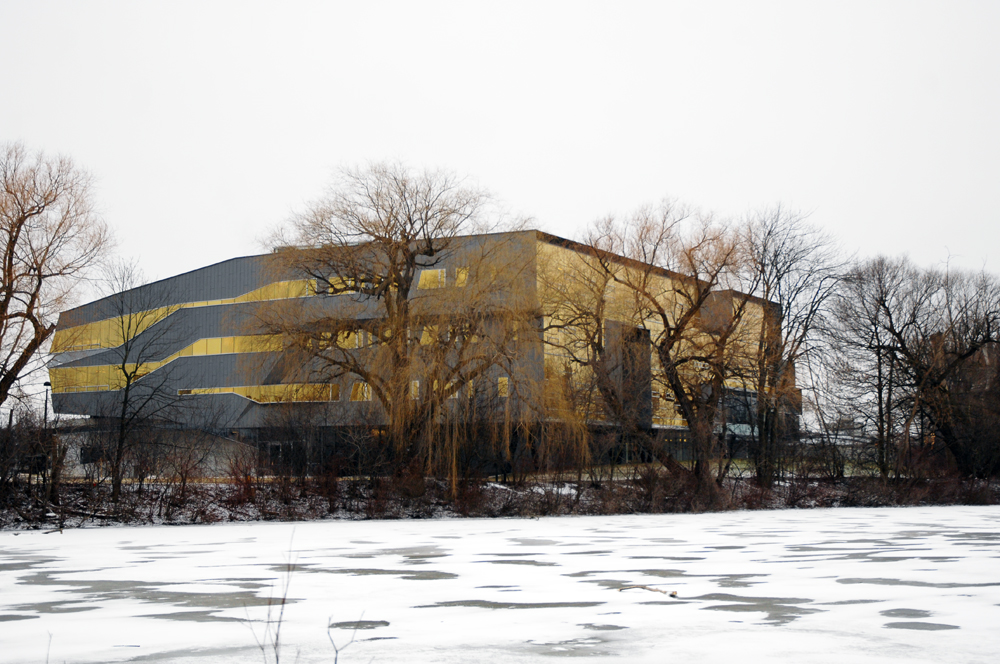 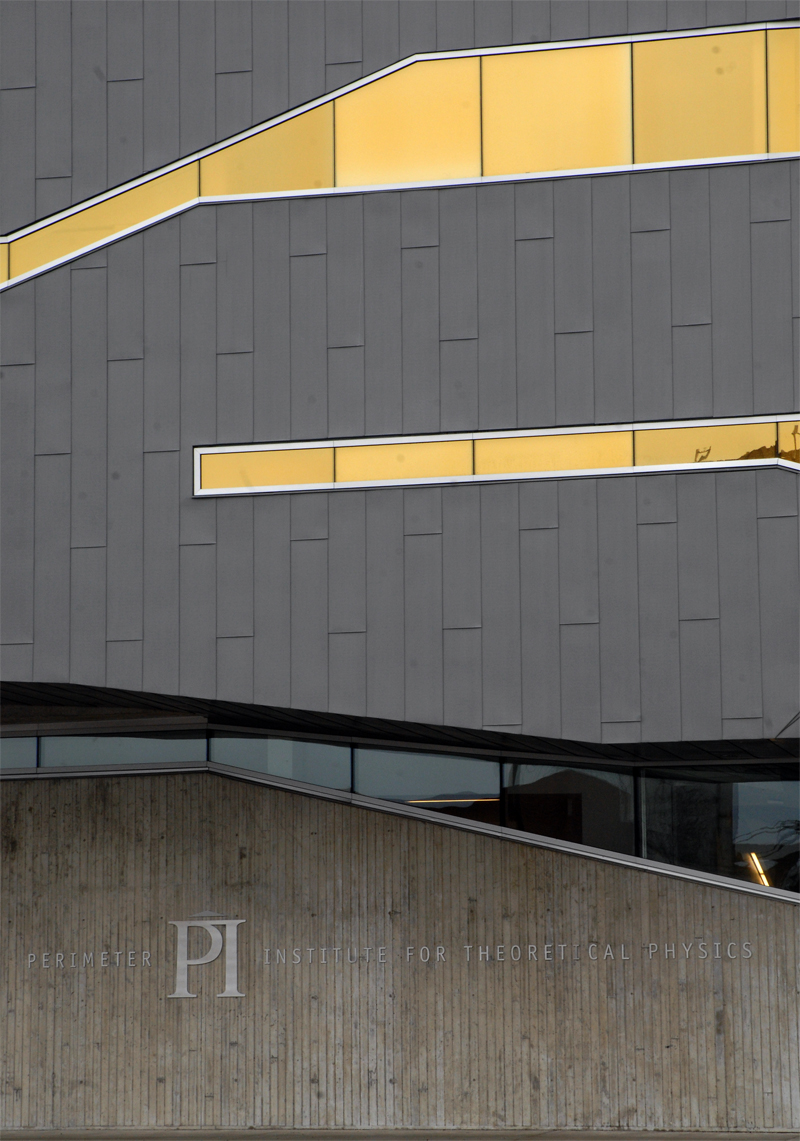 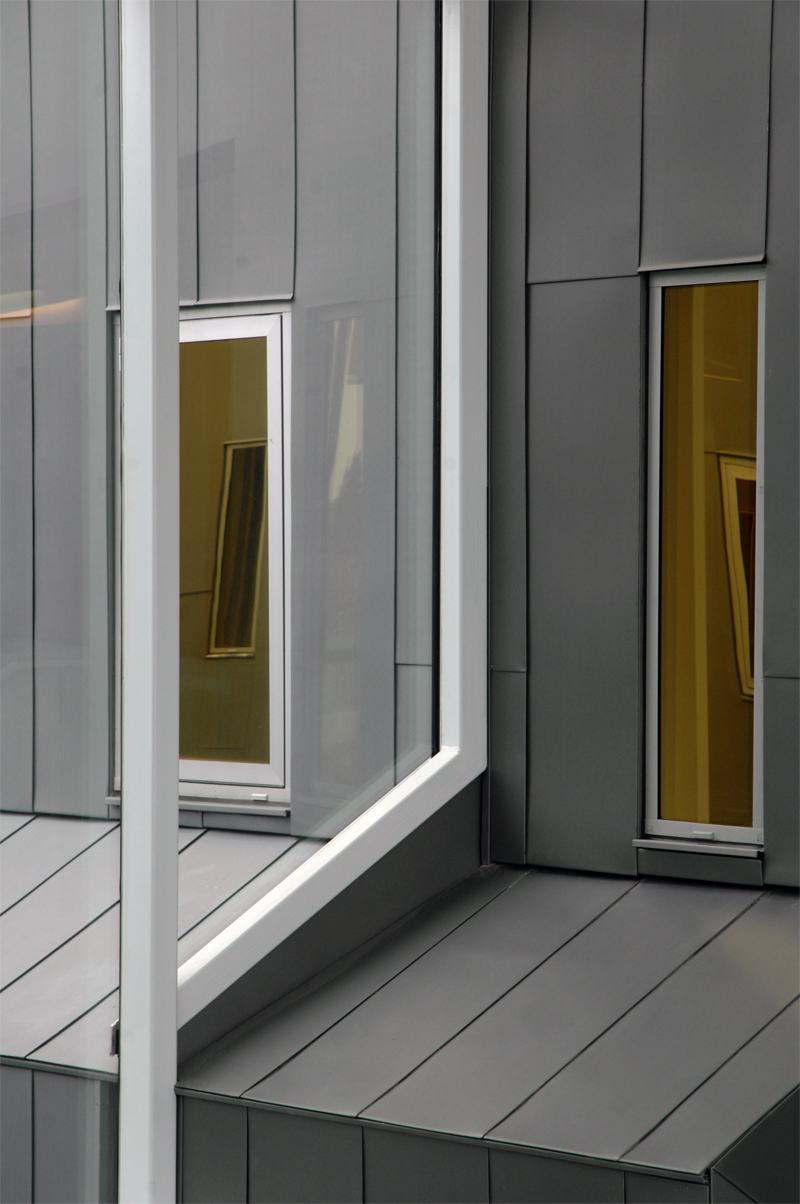 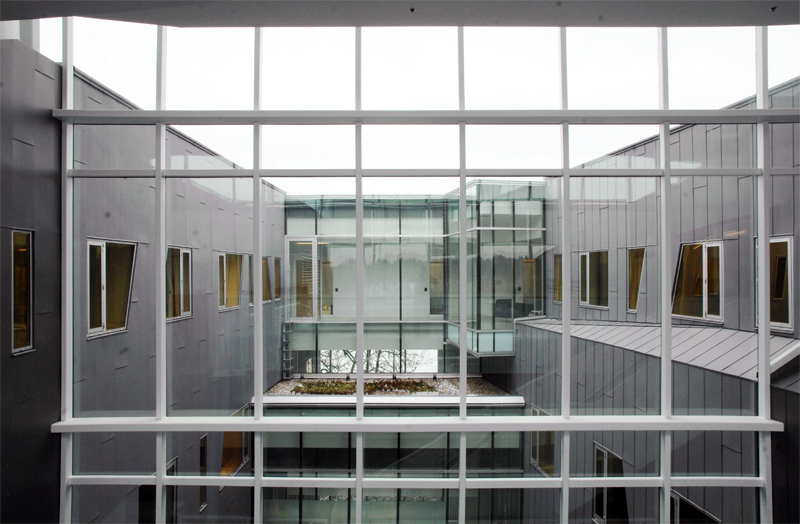 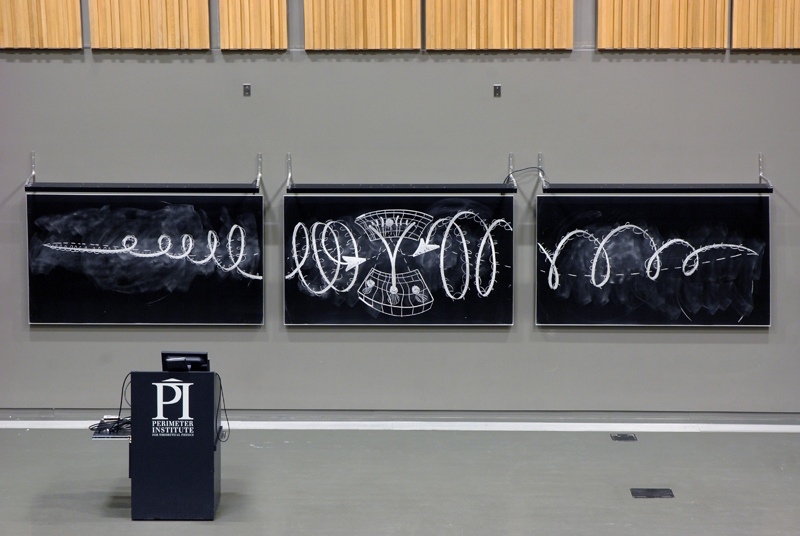 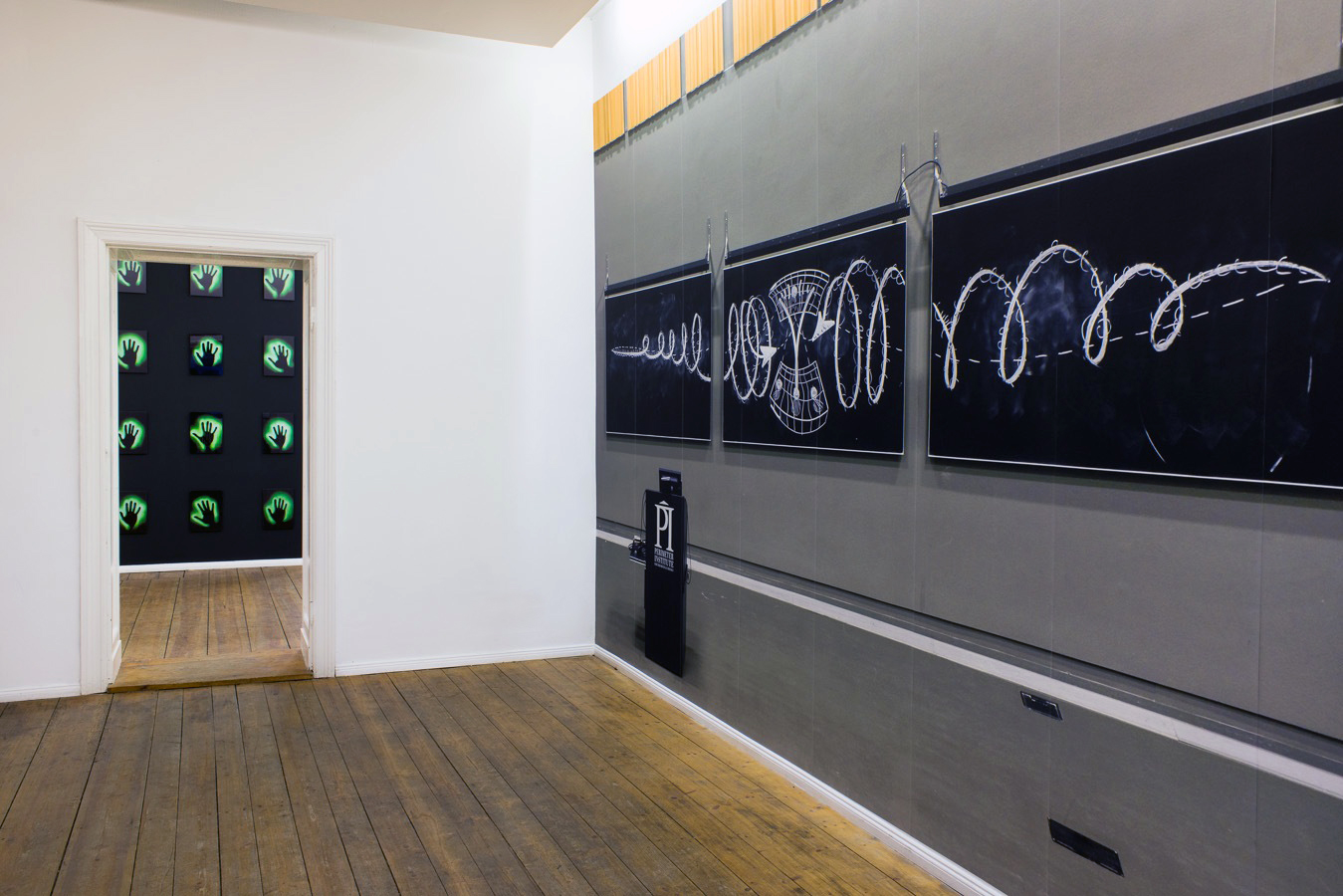 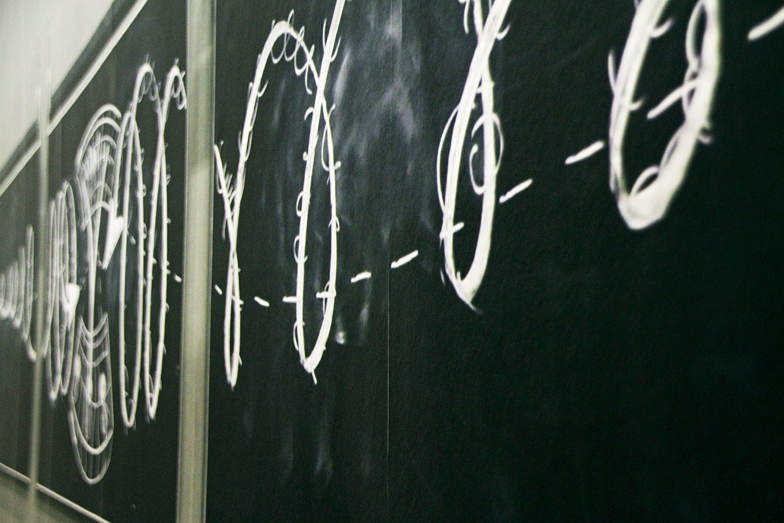 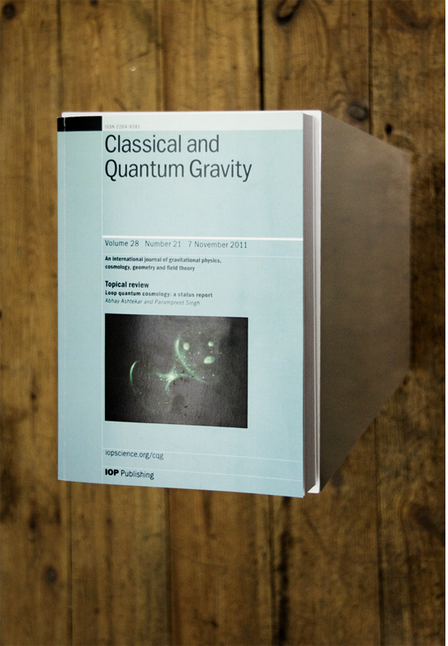 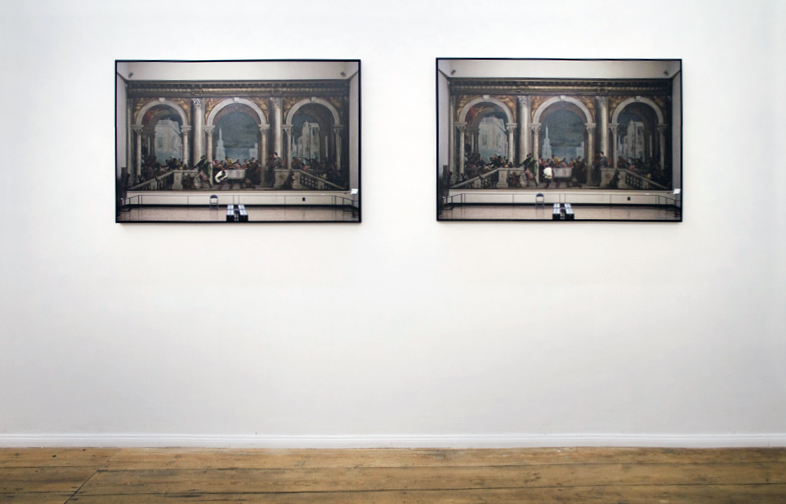 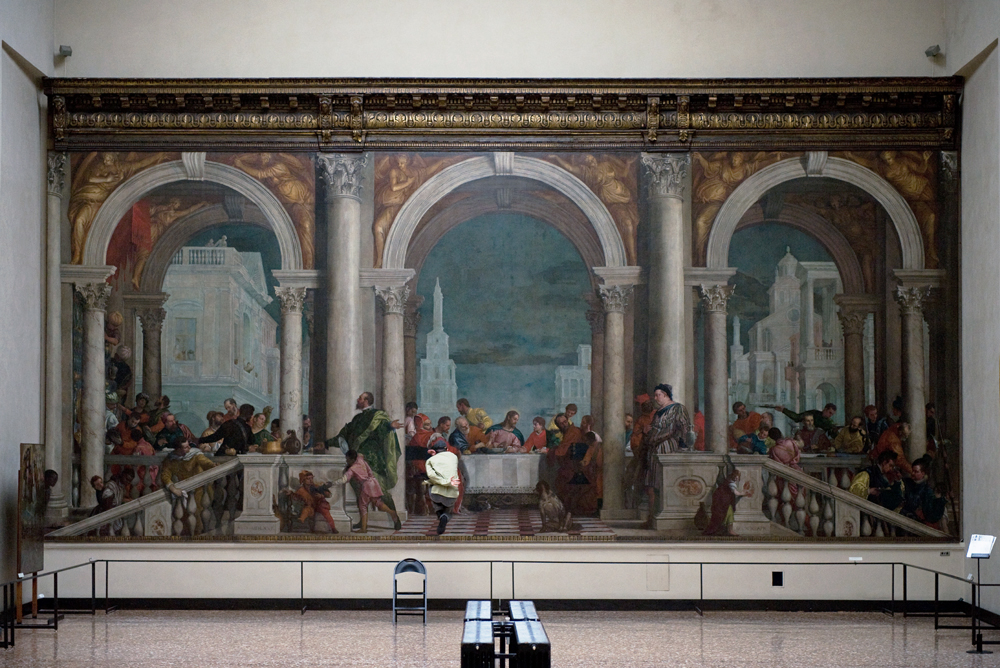 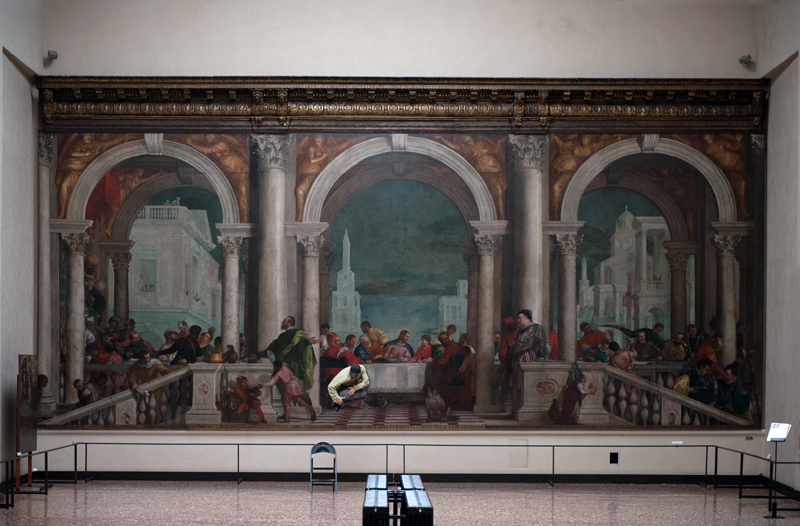 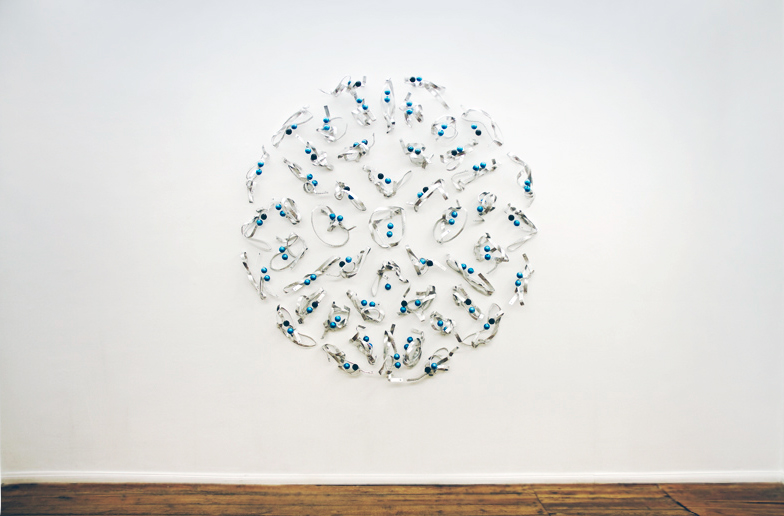 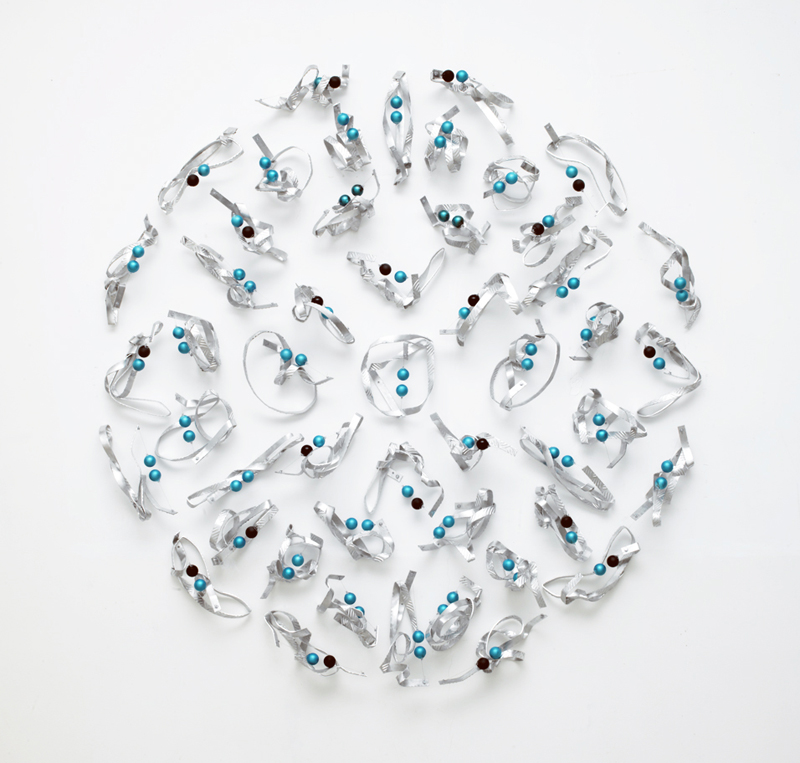 Quantum teleportation is a process by which quantum information (e.g. the exact state of an atom or photon) can be transmitted (exactly, in principle) from one location to another, with the help of classical communication and previously shared quantum entanglement between the sending and receiving location. Because it depends on classical communication, which can proceed no faster than the speed of light, it cannot be used for faster-than-light transport or communication of classical bits. It also cannot be used to make copies of a system, as this violates the no-cloning theorem. While it has proven possible to teleport one or more qubits of information between two (entangled) atoms,[1][2][3] this has not yet been achieved between molecules or anything larger.

The seminal paper[4] first expounding the idea was published by C. H. Bennett, G. Brassard, C. Crépeau, R. Jozsa, A. Peres and W. K. Wootters in 1993.[5] Since then, quantum teleportation was first realized with single photons [6] and later demonstrated with various material systems such as atoms, ions, electrons and superconducting circuits. The record distance for quantum teleportation is 143 km (89 mi).[7]

Quantum gravity (QG) is a field of theoretical physics that seeks to describe the force of gravity according to the principles of quantum mechanics, and where quantum effects cannot be ignored.[1]

The current understanding of gravity is based on Albert Einstein‘s general theory of relativity, which is formulated within the framework of classical physics. On the other hand, the nongravitational forces are described within the framework of quantum mechanics, a radically different formalism for describing physical phenomena based on probability.[2] The necessity of a quantum mechanical description of gravity follows from the fact that one cannot consistently couple a classical system to a quantum one.[3]

Although a quantum theory of gravity is needed in order to reconcile general relativity with the principles of quantum mechanics, difficulties arise when one attempts to apply the usual prescriptions of quantum field theory to the force of gravity.[4] From a technical point of view, the problem is that the theory one gets in this way is not renormalizable and therefore cannot be used to make meaningful physical predictions. As a result, theorists have taken up more radical approaches to the problem of quantum gravity, the most popular approaches being string theory and loop quantum gravity.[5] A recent development is the theory of causal fermion systems which gives quantum mechanics, general relativity, and quantum field theory as limiting cases.[6][7][8][9][10][11]

Strictly speaking, the aim of quantum gravity is only to describe the quantum behavior of the gravitational field and should not be confused with the objective of unifying all fundamental interactions into a single mathematical framework. While any substantial improvement into the present understanding of gravity would aid further work towards unification, study of quantum gravity is a field in its own right with various branches having different approaches to unification. Although some quantum gravity theories, such as string theory, try to unify gravity with the other fundamental forces, others, such as loop quantum gravity, make no such attempt; instead, they make an effort to quantize the gravitational field while it is kept separate from the other forces. A theory of quantum gravity that is also a grand unification of all known interactions is sometimes referred to as a theory of everything (TOE).

One of the difficulties of quantum gravity is that quantum gravitational effects are only expected to become apparent near the Planck scale, a scale far smaller in distance (equivalently, far larger in energy) than what is currently accessible at high energy particle accelerators. As a result, quantum gravity is a mainly theoretical enterprise, although there are speculations about how quantum gravity effects might be observed in existing experiments.[12]