The project examines the potential unifying power of the drawing practice conceived as a primitive invention able to survive the inexorable passage of time. A basic tool that has always been used to design, understand and visualize the phenomena of the world, and that, in the specific case of the U-Drawings’s project it has been interpreted as a detector of a brand new range of hidden structures rooted into the fabric of the space-time himself as described by a contemporary scientific conjecture called Loop Quantum Gravity.

Starting from the groundwork of the Italian physicist Carlo Rovelli, interviewed by the artist in the occasion of the show, and studying the fascinating conjecture of the Loop Quantum Gravity approach, Luca Pozzi manages to construct a circular connective system composed of three different installations intimately related, “Spin Network”, “Loop Quantum Gravity Through Borges Library” and “Laputa Pyramid”. 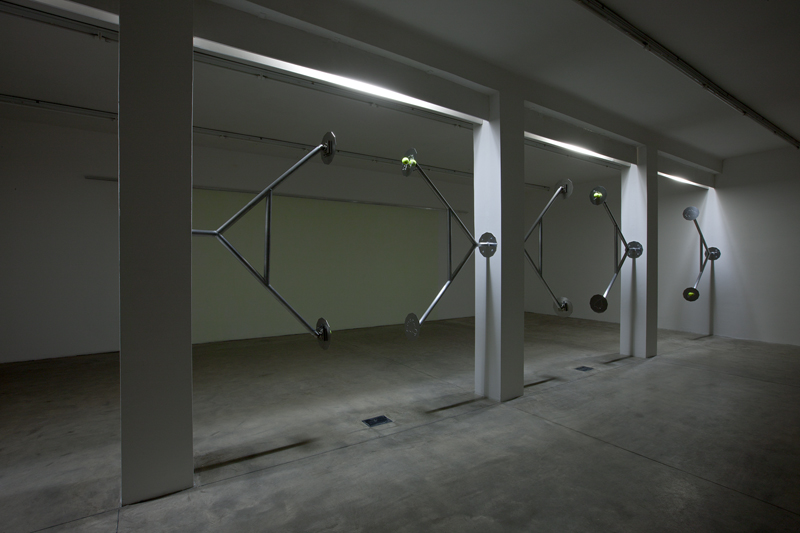 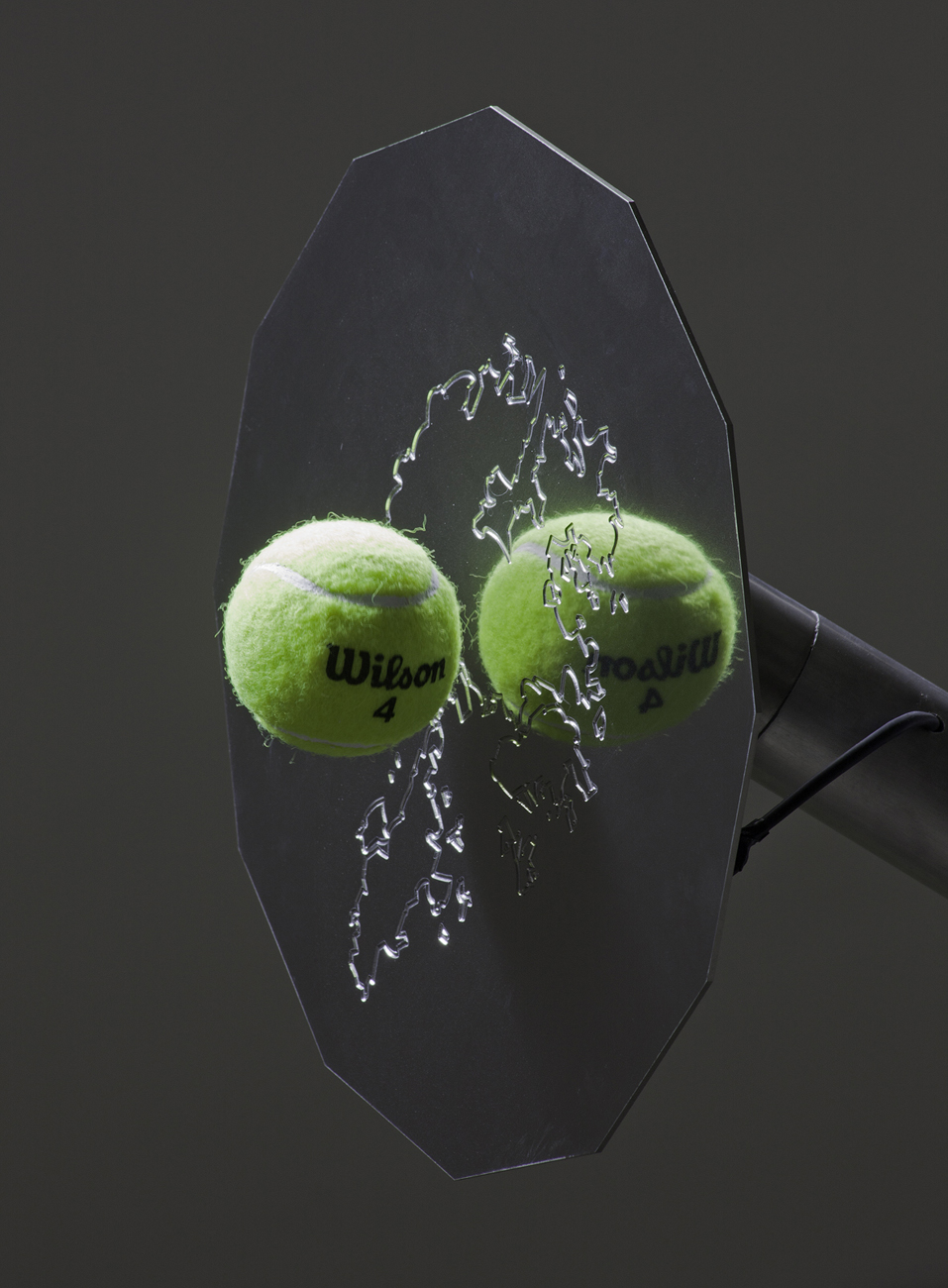 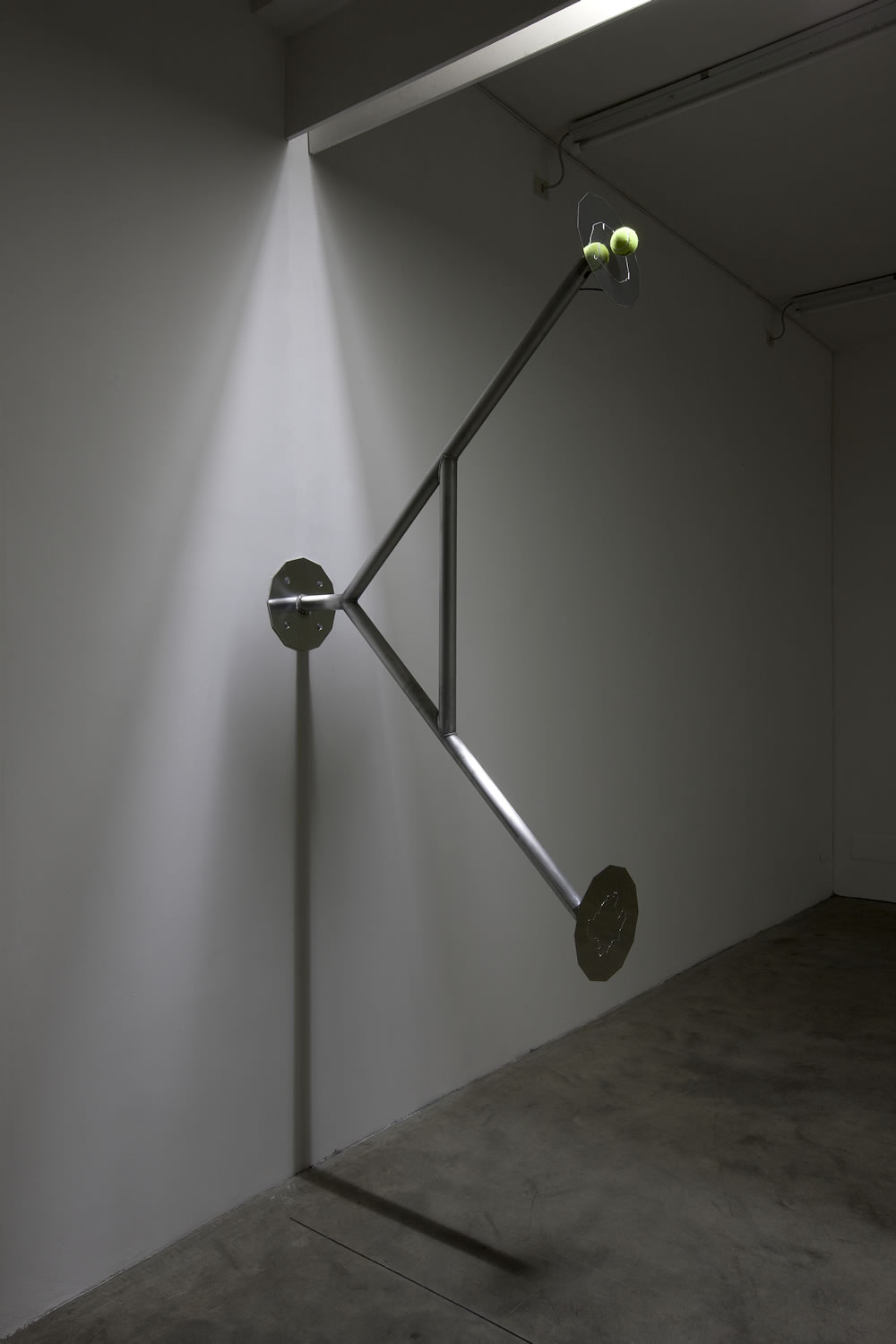 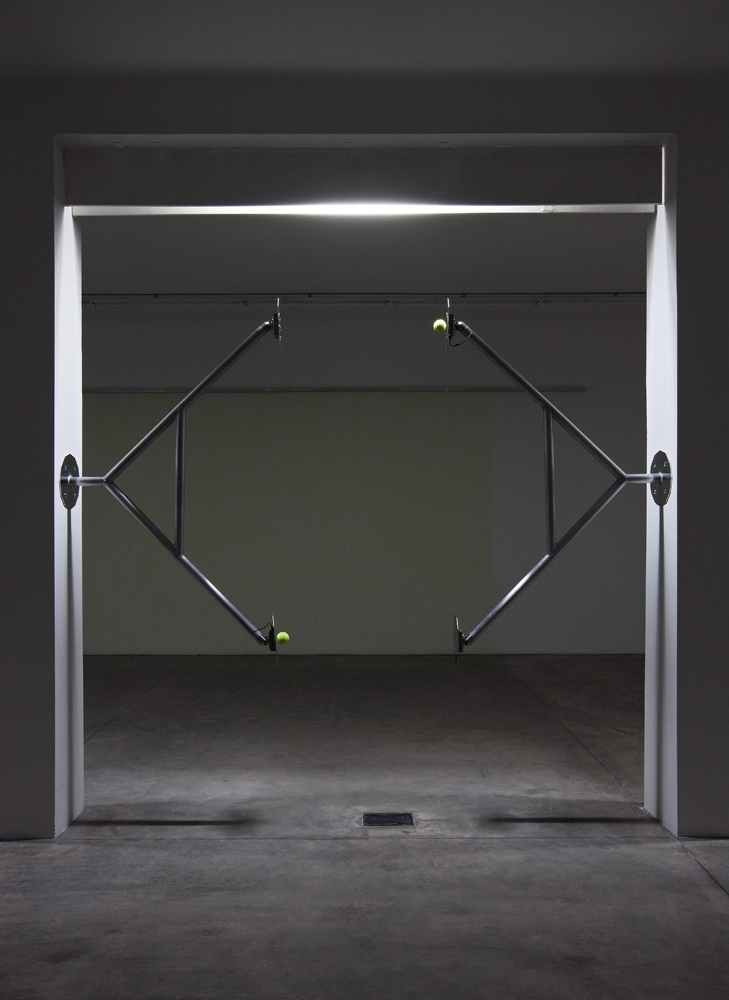 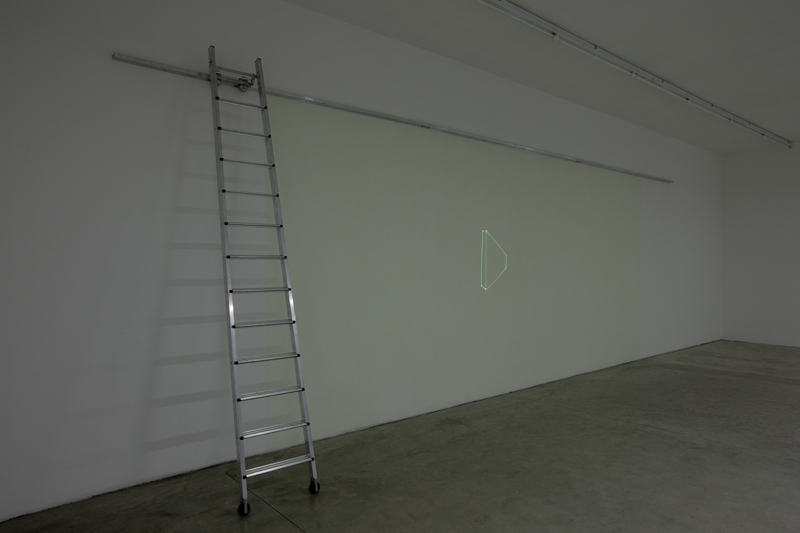 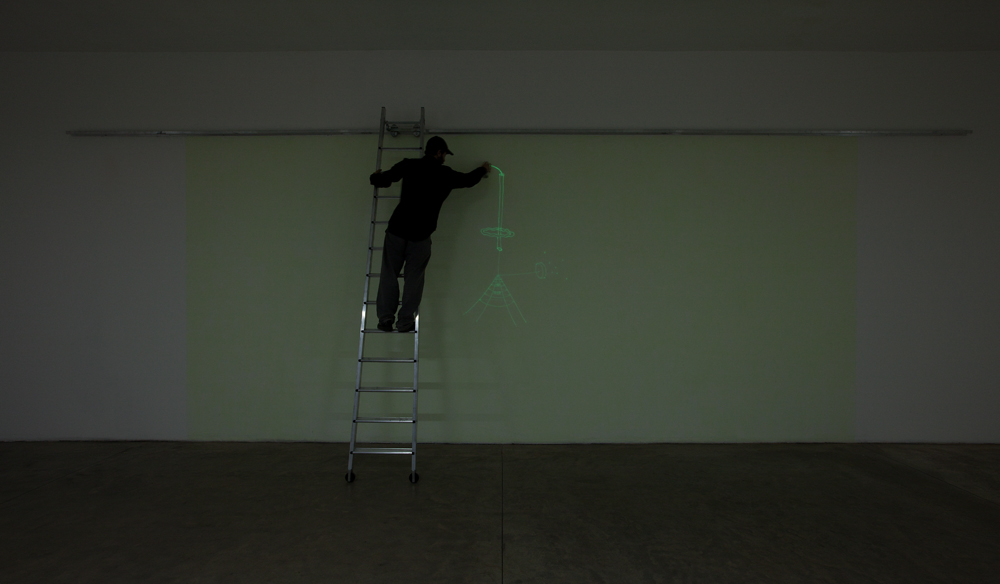 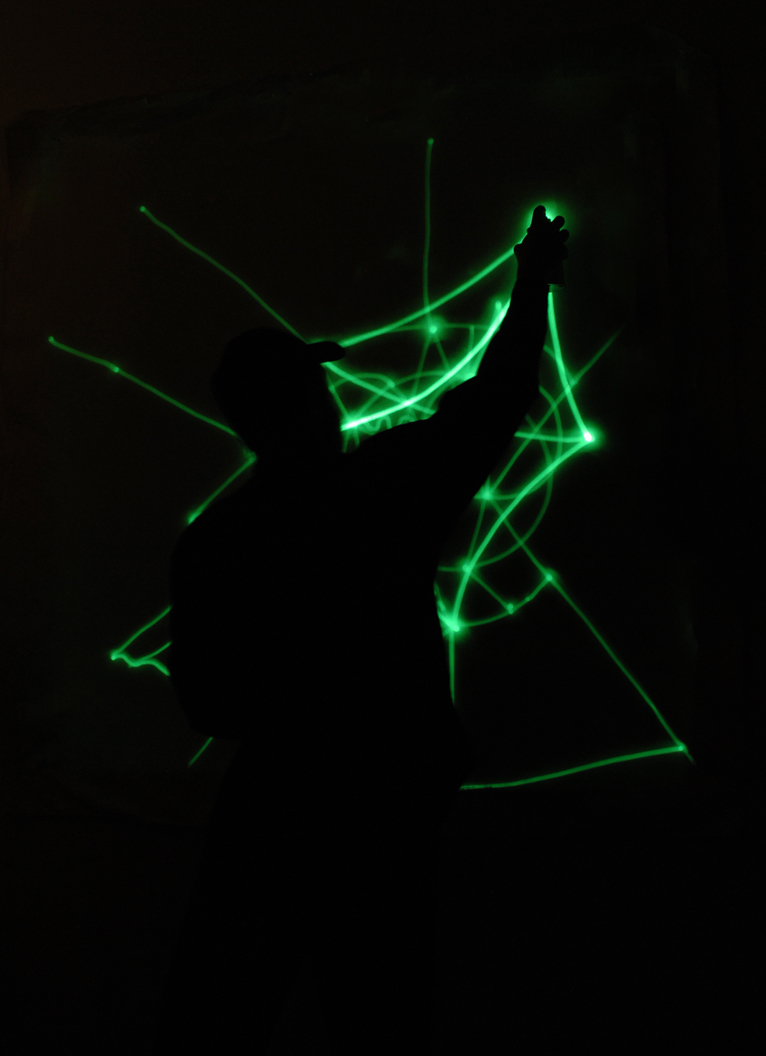 “In physics, a spin network is a type of diagram which can be used to represent states and interactions between particles and fields in quantum mechanics. From a mathematical perspective, the diagrams are a concise way to represent multilinear functions and functions between representations of matrix groups. The diagrammatic notation often simplifies calculation because simple diagrams may be used to represent complicated functions. Roger Penrose is credited with the invention of spin networks in 1971, although similar diagrammatic techniques existed before that time.

Spin networks have been applied to the theory of quantum gravity by Carlo Rovelli, Lee Smolin, Jorge Pullin, Rodolfo Gambini and others. They can also be used to construct a particular functional on the space of connections which is invariant under local gauge transformations.

A spin network, as described in Penrose 1971, is a kind of diagram in which each line segment represents the world line of a “unit” (either an elementary particle or a compound system of particles). Three line segments join at each vertex. A vertex may be interpreted as an event in which either a single unit splits into two or two units collide and join into a single unit. Diagrams whose line segments are all joined at vertices are called closed spin networks. Time may be viewed as going in one direction, such as from the bottom to the top of the diagram, but for closed spin networks the direction of time is irrelevant to calculations.

More formally, a spin network is a (directed) graph whose edges are associated with irreducible representations of a compact Lie group and whose vertices are associated with intertwiners of the edge representations adjacent to it.In loop quantum gravity (LQG), a spin network represents a “quantum state” of the gravitational field on a 3-dimensional hypersurface. The set of all possible spin networks (or, more accurately, “s-knots” – that is, equivalence classes of spin networks underdiffeomorphisms) is countable; it constitutes a basis of LQG Hilbert space.One of the key results of loop quantum gravity is quantization of areas: the operator of the area A of a two-dimensional surface Σ should have a discrete spectrum.”A spin network, immersed into a manifold, can be used to define a functional on the space of connections on this manifold. One computes holonomies of the connection along every link (closed path) of the graph, determines representation matrices corresponding to every link, multiplies all matrices and intertwiners together, and contracts indices in a prescribed way. A remarkable feature of the resulting functional is that it is invariant under local gauge transformations.”

“In 2008, Markopoulou, Tomasz Konopka and Simone Severini initiated the study of a new background independent model of evolutionary space called quantum graphity.In the quantum graphity model, points in spacetime are represented by nodes on a graph connected by links that can be on or off.[7] This indicates whether or not the two points are directly connected as if they are next to each other in spacetime. When they are on the links have additional state variables which are used to define the random dynamics of the graph under the influence of quantum fluctuations and temperature. At high temperature the graph is in Phase I where all the points are randomly connected to each other and no concept of spacetime as we know it exists. As the temperature drops and the graph cools, it is conjectured to undergo a phase transition to a Phase II where spacetime forms. It will then look like a spacetime manifold on large scales with only near-neighbour points being connected in the graph. The hypothesis of quantum graphity is that this geometrogenesis models the condensation of spacetime in the big bang. A second model, related to ideas around quantum graphity, has been published.[8]“

“A phase transition is the transformation of a thermodynamic system from one phase or state of matter to another one by heat transfer. The term is most commonly used to describe transitions between solid,liquid and gaseous states of matter, and, in rare cases, plasma. A phase of a thermodynamic system and the states of matter have uniform physical properties. During a phase transition of a given medium certain properties of the medium change, often discontinuously, as a result of the change of some external condition, such as temperature, pressure, or others. For example, a liquid may become gas upon heating to the boiling point, resulting in an abrupt change in volume. The measurement of the external conditions at which the transformation occurs is termed the phase transition. Phase transitions are common in nature and used today in many technologies.”